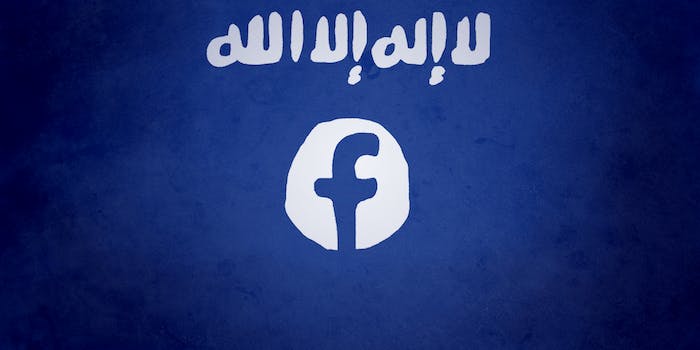 It's the philosophy behind Facebook that helps radical groups, not how they use it.

Let’s admit it: Social media has been used to help brands and businesses all around the world—and they help ISIS too, in spite of everything they think they are doing.

Sadly, ISIS, or Daesh, has now become a successful brand, with all of its characteristics. It has a target audience, a unique identity (with a logotype, flag, and a slogan), passion, consistency, competitiveness, exposure, and leadership.

As a result, leaders and senior managers of social networks, have been under increasing pressure, by politicians and the public, to deprive Daesh from such powerful tools for expanding its apocalyptic anti-humanism.

That’s obviously a big challenge. The West brags about its tolerance of diverse opinions, and it is always difficult for legislatures to draw a clear line between what type of speech is a crime and what not, without defeating the very purpose for which free speech has been guaranteed in representative democracies. Also, if such a clear line is drawn, it takes a lot of resources for a social network to set up and maintain a system that automatically flags illegal content.

Let’s admit it: Social media has been used to help brands and businesses all around the world — and they help ISIS too, in spite of everything they think they are doing.

Spotting criminal language, for its very complex system of playful signs, is a lot more difficult than spotting pornographic content, which many of them have been enforcing successfully.

However difficult, Twitter has reportedly closed down thousands of Daesh-related accounts. Facebook also has shut down many.

So what else is to be done, apart from this endless game of cat-and-mouse?

Facebook CEO Sheryl Sandberg has apparently been giving it some thought.

Last month, at the World Economic Forum in Davos, Switzerland, she proposed to fight Daesh with ‘Like’ attacks. She drew on a recent attempt by German users who flooded a Facebook page, close to neo-Nazis, with their comments and likes, and disrupted the group.

Interesting as it may look, there is a truth that Sandberg overlooks: It is the theoretical foundation of Facebook that helps radical groups like Daesh and neo-Nazis, not how users behave in it.

Facebook works according to your habits. It surveys all your behavior, and analyses all your clicks and swipes, likes and locations, friends and foes, and God knows what else, to predict what you’d like to see in your newsfeed. A famous study last year showed that with only 300 likes Facebook can know you better than your spouse.

Obviously the most important purpose is to get a bigger portion of your attention and to sell it with the highest price to anyone who is ready to pay for it: From election candidates to shop owners, from insurance companies to dating services.

Facebook works according to your habits. It surveys all your behavior, and analyses all your clicks and swipes, likes and locations, friends and foes, and God knows what else, to predict what you’d like to see in your newsfeed.

But what happens amid all this capitalist quest is very scary. Facebook never wants to upset, challenge, or disagree with you. It creates a shelter that protects what you already are. A bubble, an echo chamber, a walled garden, a uterus.

The same way a banker, a gymnast, or a feminist is fed by what she or her friends and colleagues find interesting, a Daesh sympathiser is always fed with messages and pictures which only reinforce his logic and sentiments. He or she is rarely challenged or disagreed with, just as you are. Everyone enjoys her comfortable bubble and thinks of himself as the centre of world.

This is where the problem lies. If Facebook and other social networks desire to contribute to peace, they must change their rules—their codes and algorithms—to give us sometimes what we don’t want to hear, something that breaks our comfortable habits.

Hossein Derakhshan is a Canadian-Iranian author and journalist. Derakhshan spent six years in prison in Iran over his blog posts and other web activities. A pioneer of blogging, he is known as the “Blogfather” in Iran. He is the author of The Web We Have to Save. Derakhshan now writes about Iran and technology for various media outlets, including Hamshahri Javan in Tehran. He is also the creator of Link-age, an art project to promote open and diverse internet. Follow him on Twitter @h0d3r.