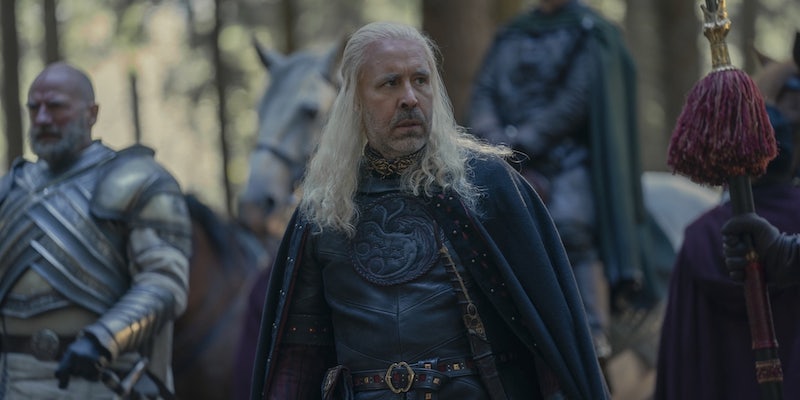 The show didn't edit a shot meant to be edited through visual effects.

Warning: This article contains spoilers for House of the Dragon episode 3, “Second of His Name.”

One of the biggest stories around Game of Thrones’ divisive final season had nothing to do with the plot. One episode had an accidental inclusion of a to-go coffee cup that led to days of headlines and memes until HBO digitally removed it, and House of the Dragon’s showrunners later joked about how “there was lots of Starbucks-hunting going on” in their prequel series. While those efforts have been successful so far, another modern aspected managed to escape notice and made it into the episode.

“Second of His Name” is set several years after the previous episode, a fact that the show demonstrates in several ways. It’s set during the 2nd name day celebration of Prince Aegon, Viserys’ (Paddy Considine) firstborn son with Alicent Hightower (Emily Carey), the latter who is heavily pregnant with her second child. The War in the Stepstones has been carrying on for some time and is at a stalemate. And King Viserys Targaryen, whose hand we last saw being placed in a bowl of maggots so that the bugs could eat away at the dead skin on the finger he cut on the Iron Throne, is now missing two fingers on his left hand.

How did that come to be? In the pilot, Viserys cuts his left pinkie on the Iron Throne, which, despite its size, wouldn’t properly heal (just like the wound on his back). The infection spreads, and when maggots don’t work, the maesters progress to amputation. Fire & Blood doesn’t feature cuts from the Iron Throne that refuse to heal, but cutting oneself on the royal seat is seen as a sign of weakness and rejection by the Iron Throne.

Here, the throne slowly eating Viserys alive is more of a metaphor pointing to Viserys being ill-suited to be king, which is also driven home when the rare white hart (a symbol often used in folklore) that Viserys’ hunting party is so keen to find appears in front of his daughter Rhaenyra (Milly Alcock) instead.

Viserys’ missing fingers aren’t immediately noticeable at first in the episode because he’s wearing gloves for much of it; unless you look for the glove’s flatness where fingers should be in the left hand, you might miss it. Later on, as Viserys speaks to Alicent about trying to marry Rhaenyra to one of Westeros’ eligible lords and the conflict in the Stepstones, close-ups show Viserys missing two fingers; the stubs still show signs of infection.

In the scene immediately following, a gloveless Viserys hands a scroll to a messenger tasked with alerting Daemon Targaryen (Matt Smith) that help from The Crown is on the way. But if you look closely (around the 46:07 mark), you’ll notice that Viserys doesn’t have two missing fingers. Instead, you can spot the two green screen finger gloves that Considine wore to allow the visual effects team to erase those fingers and digitally turn them into stubs.

Some fans noticed it soon after it aired, if not immediately.

A couple of days after “Second of His Name” aired, the reception toward this error is much more muted than the one that arose after the to-go cup appeared in Game of Thrones. Any number of factors could explain this—the episode aired during a holiday weekend so not as many people might have watched live or House of the Dragon has gotten a warmer reception than Game of Thrones did at the end (and the benefit of the doubt)—could serve as a potential explanation.

You can also understand how the detail got overlooked and unnoticed. The green screen finger gloves appear in a brief transitional scene with the scenes before and after it (Viserys’ conversation with Alicent and Daemon receiving the letter on the Stepstones) standing out more. The king’s hand is located at the bottom of the screen and mostly covered in shadows as his good hand has the scroll set for Daemon in hand. Depending on your TV or device settings, it might be difficult, if not near impossible, to spot the error.

And it’s not like it’s an issue in the rest of the episode, either. The fingers are removed in Viserys’ conversation with Rhaenyra about marriage in the shots where you can see his left hand. And once we return to the Stepstones to watch Daemon take the Crabfeeder head-on, that action becomes an impressive episode-ending spectacle, so the finger gloves are more of a distant memory.