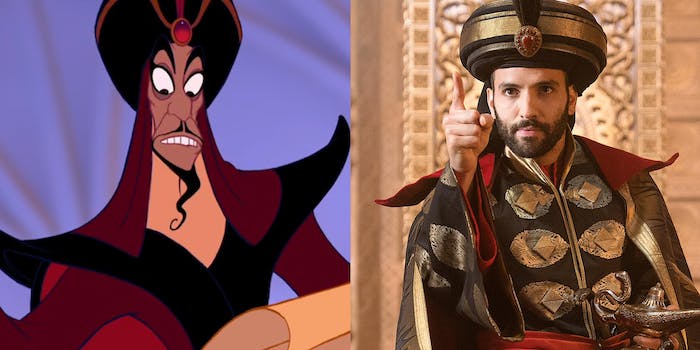 Everyone is confused and turned on by ‘Hot Jafar’

'We will be rooting for evil.'

The cast of Disney’s live-action remake of Aladdin appeared on the cover of Entertainment Weekly’s latest issue on Wednesday, giving fans their first look at how the characters will be brought to life. Fans were quick to notice that our villain, Jafar, who was formerly animated and evil is hot in this remake.

Marwan Kenzari, who is now being referred to on Twitter as “Hot Jafar,” is a Tunisian-Dutch actor. And everyone’s new favorite person to thirst after. In the photo released today, Jafar is seen wearing his iconic black, red, and gold robes. He looks much hotter than he does evil, which is what has people confused.

“Hot Jafar is the best thing about the upcoming live-action Aladdin,” one person said.

Hot Jafar is the best thing about the upcoming live-action Aladdin. pic.twitter.com/PpaOIzYiRN

“Hot Jafarar … we WILL be rooting for evil,” another person wrote.

hot jafar … we WILL be rooting for evil pic.twitter.com/Z1RTGK4pkX

Others say animated Jafar was just as hot. “Jafar was always hot,” someone pointed out.

Others expressed confusion. How are we supposed to root for the good guy when the evil one is so attractive?

“Confused how I feel about this hot Jafar,” someone said.

confused how i feel about this hot jafar https://t.co/UPf4TO5hNa

“I hope Aladdin’s acting is phenomenal, otherwise I’m going to be cheering for Jafar based on his hotness alone,” someone said on Twitter.

I hope Aladdin's acting is phenomenal, otherwise I'm going to be cheering for Jafar based on his hotness alone.

But many are still on board with the hot villain. “Nothing but respect for MY hot Jafar,” writer Anne Cohen said.

Nothing but respect for MY hot Jafar pic.twitter.com/uGR1xCqPZ6

We’re only a few months away from seeing hot Jafar in all his glory on the big screen. Aladdin is set to release on May 24.