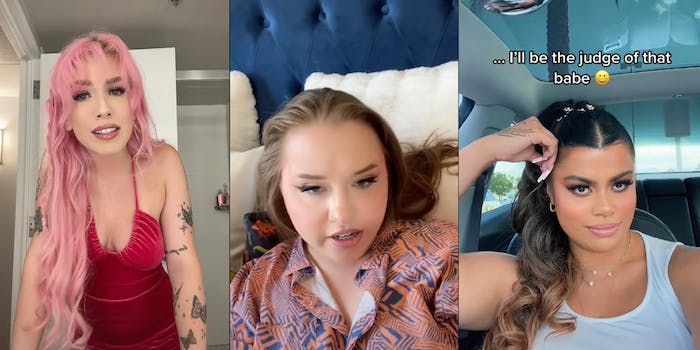 VidCon: TikTok ‘Hot Gurlz’ discuss dating red flags and what fans get wrong about them

One of the last panels of the second day at VidCon was a hidden gem that not enough people stuck around for. Drew Afualo, Sarah Schauer, and Chrissy Chlapecka sat on the “Hot Gurlz Only” panel and spoke about what it’s like to be a “Hot Girl” on the internet. The conversation was moderated by Michaela Okland—the host of She Rates Dogs.

The panel started 20 minutes behind schedule after Chlapecka arrived late, and the rest of the group took pictures with adoring fans while they waited for her to arrive. Noticeably absent both on the panel and in the audience were Black women. The term Hot Girl Summer was coined by rapper Megan Thee Stallion in 2019, and it has since become a topic of online discourse. On Twitter, some users claimed that influential white women like Bella Hadid were “the pinnacle of Hot Girl,” but others pushed back and argued that the actual pinnacle is the woman who coined the term.

The event started out with Okland asking the panelists about brand partnership inquiries and if they had ever been asked to work with a brand that doesn’t make sense for them. “Brittany [Broski] and I have a podcast together and I’ve spent a solid six episodes of the podcast talking about how my mom hates me,” Schauer said. “Then a brand asked me to be a part of a Mother’s Day campaign.” She said she was so shocked about the inquiry that they had to have Broski read the email to make sure it was real.

When it comes to being misunderstood, Okland wanted to know if the panelists felt that their fans had any misconceptions about them. Afualo was quick to respond and said that she feels her fans think she’s always loud and mean. “Don’t get me wrong, I’m mean,” Afualo said while giggling, “It’s not how I am all of the time, I’m a lot more laid back.”

Chlapecka said she felt that her fans probably have a “really good” idea because of how much she shares of her life online. They also spoke about how sharing online with people gave them an opportunity to find a sense of community—especially for those just starting out in content creation. “I finally found a lot of my community just online and like through scrolling and like seeing people being comfortable with themselves and their queerness which really inspired me to be this mess of a person that I am today.”

Schauer said that she finds her community online but also through random classes that she loves to take—it could be anything from falconeering classes to woodshop.

When the floor was opened up to questions from the audience, most of the questions asked the creators for dating advice, such as “What’s an immediate red flag?” to which Afualo quickly responded, “If he doesn’t like me or my content.” One person approached the mic and asked, “With all the strides that brands have made with asking people to buy ‘Rainbow shit’ and for a little while there, all of a sudden, they decided Black Lives Matter was popular enough to like put on their billboards. When are we gonna see that for topless inequality?” the person said passionately, “I’m sorry, it’s 2022 and we’re still assigning censorship rights based on what gender you look like.”

Schauer took the question and clarified that it’s not brands but rather platforms that get to decide on platform equality. They said they would love to see more topless people, but it’s more nuanced than that.