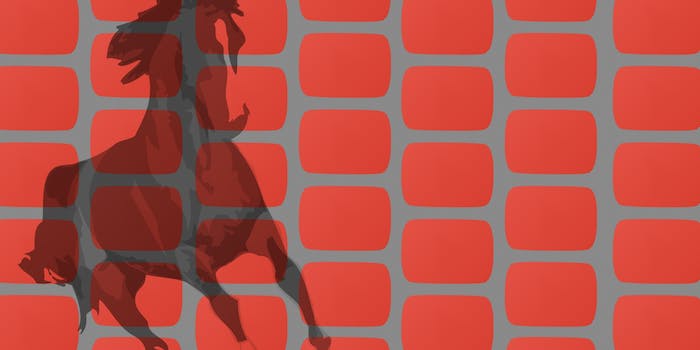 On Tuesday, after a cryptic 77-day countdown inspired fantheories about everything from Edward Snowden to Battlestar Galactica, the people behind the mysterious viral YouTube channel Pronunciation Book revealed they were also the writers of “weird Twitter” darling account @Horse_ebooks.

Their names are Jacob Bakkila and Tom Bender: the former, a creative director at BuzzFeed; the latter a former VP at Howcast.

Those channels weren’t the only YouTube mysteries they were running, Bakkila told us. Supposedly, there are two others that haven’t been revealed: Video Royale and EmmaSaying.

Pronunciation Book also has a female version, called EmmaSaying. Emma was originally voiced by Betsy Winchester, a member of NYC improv troupe Murderfist. It’s unknown if she is still participating in the videos.

EmmaSaying was supposed to take off the way Pronunciation Book did, but it never got the same level of attention. Still, as of a week ago, it was regularly updated.

Video Royale had a similar purpose, but it was abandoned about a year ago.

Pronunciation Book is more than three years old. It began just as the name described: a guide for pronouncing various English words, often popular Google search terms, the makers said. In July, however, it transformed into the series you see today: random messages composing fragments of a sci-fi narrative. Neither channel, VideoRoyale or EmmaSaying, has been acting strangely the way PB did. Perhaps the makers gave up on them, having already figured out which channel was the cash cow they needed to create buzz for their next project.