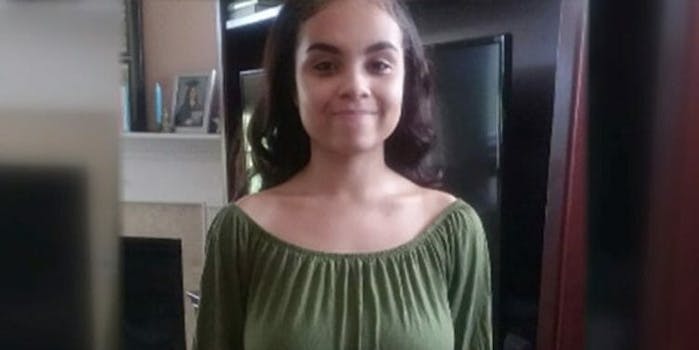 She's suspended for showing her shoulders.

A high school honor student with a 4.4 GPA has been suspended over an alleged dress code violation, preventing her from participating in senior class activities and walking at graduation. Her classmates and the internet are rallying to support her, because the allegedly inappropriate shirt she was wearing looks … well, totally normal.

The girl, identified only as “Summer,” goes to Hickory Ridge High School in Harrisburg, North Carolina. She told local news station WCNC that she’s had issues with the school’s principal before, consistently enough that her mom asked the school to call her whenever Summer is in trouble.

On this occasion, Summer was in the cafeteria, wearing a green shirt that partially bared her shoulders, and principal Michelle Cline ordered her to the school’s control room to change. Summer refused, saying her shirt was fine. She borrowed a jacket from a friend and zipped it up, just to make sure there could be no question she was in compliance with the dress code.

That apparently wasn’t good enough for the principal, who Summer says cornered her at an assembly later that day, with the school police officer (the “SRO”) to back her up.

Summer told WCNC that the officer “was within five feet of me, he had his hand on his gun.”

Then Cline allegedly told her, “I’m gonna give you an ultimatum. We have tried to call your mother. You either come with me to the control room to change your shirt or we will arrest you.”

She wasn’t arrested, after the school got in touch with her mother, but she was suspended for 10 days and barred from walking at graduation due to her “insubordination.” Summer told WCNC she believes the principal is even considering expelling her.

Students’ problems with Cline and the dress code didn’t start with Summer’s suspension. The principal also made local news last September for disciplining 45 female students for wearing leggings as pants.

Now Summer’s classmates, and a bunch of supportive strangers from the internet, are furious.

“When there are teens with sexual assault charges walking the hallways, insubordinate teachers that fail to comply to ethical guidelines, children being improperly graded for previous history, multiple drug offenders still among us, administration brushing off any concerns from parents regarding academic health but it’s all okay because you overly sexualized a shoulder,” wrote one person, seemingly a student, in a Google review of the school.

A popular tweet about Summer’s plight has tens of thousands of retweets, and a campaign has begun to call and email the school to protest her suspension.

ok so this young lady, an HONORS student with MULTIPLE scholarships got suspended basically for the rest of her senior year because of this: pic.twitter.com/E264srpJCO

As of Sunday, though, the school’s only statement was to send out a copy of its dress code.