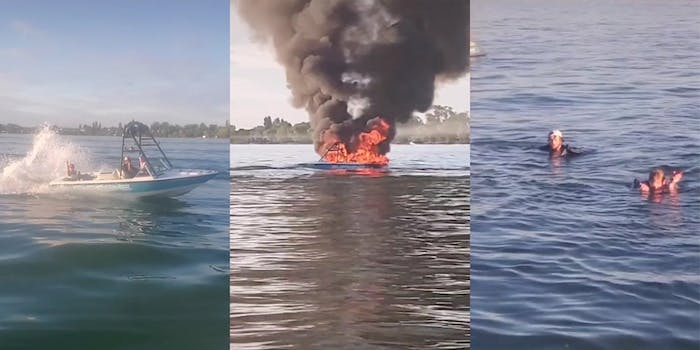 The LGBTQ+ boaters ended up rescuing the stranded boaters.

Boaters who allegedly shouted gay slurs at a boat that had Pride flags on it got a taste of humble pie recently when they had to be rescued by the very group they had been harassing.

TikToker @uhohbigboi was out on the lake with his family for Memorial Day when they ran into some boaters who apparently objected to the rainbow flag flying from their boat. The boaters allegedly shouted gay slurs at the LGBTQ+-supporting family and circled their boat in Moses Lake, Washington.

The TikToker captured some of the harassment on video. In the viral video, which has been viewed over 4.9 million times since being posted on Monday, a woman can be seen giving the finger to the boaters.

The video then cuts to the boaters in the water as their boat had “blew up.” The video shows their boat engulfed in flames and heavy smoke.

“We safely got them out of the water immediately. We were nicer than they were,” the caption on the video reads.

The text overlay—as well as the text-to-speech effect—on the video calls what happened to the boaters “karma” as the song dedicated to showcasing epic fails on the platform, “Oh No,” plays.

On Twitter, the brother of the TikToker revealed that the incident has made him and his family fearful, to the point that they now film “everyone who even pulls up close” to them.

The Twitter user, @retro_ushi_, said that “Because they were driving around us so roughly, they either damaged their carburetor or took in water and stalled. Then fumes built up and when they tried to speed away, the fumes ignited.”

Many viewers commented on how they would’ve “sailed away into the sunset” rather than help the stranded boaters. “Y’all should’ve spun circles around them while they were swimming and then left,” one TikToker even suggested.

The sentiments sparked a debate about whether the boaters were legally obligated to help out the stranded ones.

“The law argues you have to take capsized people if your vessel can hold them. If they’re a threat then no, but may be hard to determine bigotry alone constitutes a threat as odd as that sounds. Your course of action seems wisest,” one Twitter user wrote, to which another said, “Considering the video, the people in the boat could 100% argue that they felt threatened by them if they wanted.”

Some lauded the family for being the bigger people. “I’m proud of your generosity,” one TikToker said.

Sadly, the gesture of goodwill seemed to go over their heads, because, according to @retro_ushi_, they didn’t even bother saying thank you to the family.

Even though the incident left the family fearful, the Pride flag-waving boaters refused to be cowed by it. The Twitter user uploaded a video back out on the water with his family—and a Philadelphia trans Pride flag in tow.

The Daily Dot has reached out to @uhohbigboi.