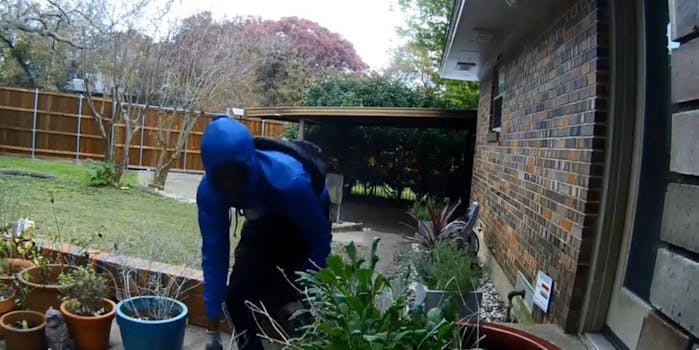 These songs will be swimming through your head all day.

The video below seems like your typical security-camera-catches-burglar-in-the-act video. You can watch as the would-be robber scopes out his target at about 11:30am on Wednesday in Oak Cliff, Texas. You can watch him enter the house, see a police car pull up to the front yard, and view the home invader appear to pull out a gun in response.

But that’s not the genius of the video below. What makes this video special—aside from the potential thrill of watching an alleged crook got caught red-handed by the people in blue—is the soundtrack that accompanies the pictures.

Watch and listen with pleasure (though be forewarned, turn down your volume before pressing play).

As Cops viewers for the last 27 years will attest, there’s a reason why listening to Inner Circle’s “Bad Boys” is so pleasurable after somebody doing something bad gets arrested. But listening to a cover of what sounds like a third-grader practicing his school-issued recorder is truly something special.