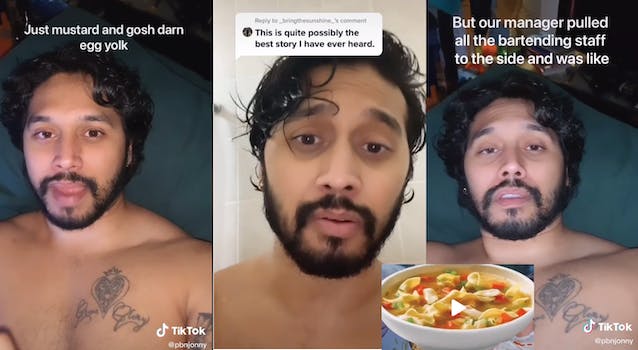 ‘I was eating this soup for breakfast, lunch, and dinner’: TikTok bartender makes a terrible dietary mistake

He thought it was a bisque.

Did you hear the one about the bartender who ate hollandaise sauce for a week because he thought it was soup?

TikTok influencer @pbnjonny went viral recently with this very autobiographical anecdote. While bartending as a student, he said in a TikTok that’s garnered 1.3 million views in the past four days, the chefs would leave food out for the night staff to take home.

“For a week I took home massive containers of this delicious soup,” @pbnjonny told his 90,000 TikTok followers. “You don’t understand, I was eating this soup for breakfast, lunch, and dinner. I was obsessed. And then for a couple days, I got really sick.”

He said he missed work with flu, and when he returned to work the manager told him: “So the chefs have noticed that a lot of the hollandaise sauce was going missing.”

That’s when it hit him.

In a follow-up TikTok, @pbnjonny lamented his brush with virality: “Only my dumbest videos will blow up.”

He likewise elaborated, saying he thought the sauce was a bisque or a lentil soup.

“Granted, I didn’t know what hollandaise sauce was at the time,” he said.

He added that commenters took him to task for getting the recipe wrong: Hollandaise sauce is butter, mustard, and egg, not just mustard and egg. According to the Food Network, you also want a tablespoon of lemon juice and pinches of cayenne and salt for a proper 4-muffin eggs benedict.

As Yahoo notes, some experts don’t think you should eat hollandaise at all because of safety concerns.