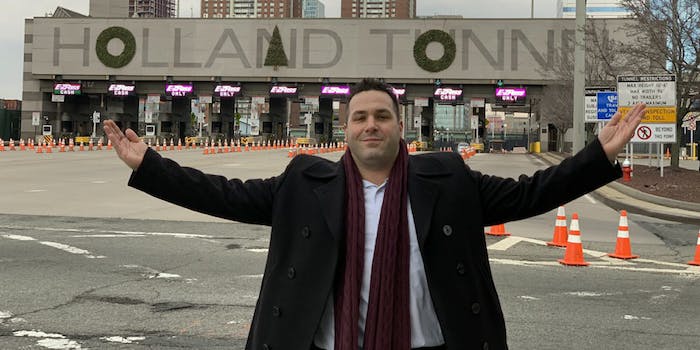 He scored over 2,000 signatures on his petition in just three days.

Last week, the internet universally condemned the Holland Tunnel (or the “Hollaad Tonnel,” if you will) for its nightmare-inducing Christmas decor. Now, in true New York fashion, one man’s online petition has sparked a chain of events that led to the Port Authority of New York and New Jersey changing the design.

“Every Holiday Season [the Holland Tunnel] is decorated with 2 wreaths and a Holiday Tree. But for some reason the tree is over the letter N in the word Holland instead of the letter A where it would fit perfectly,” Windelspecht wrote in his petition. “This one small thing triggers anyone with the slightest hint of OCD every time they enter the city. On top of that, it’s just unsightly and ruins the holiday festivities for people to enjoy on such a great piece of architecture.”

Granted, it’s not necessarily true that the decorations triggered people with OCD—obsessive compulsive disorder is a lot more complicated than just an impulse to make objects fit perfectly. That said, Windelspecht quickly gained support from people annoyed by the sign. Over 2,000 internet users signed the petition in just three days, thanks in part to a boost from Budweiser. Windelspecht even spoke out against the decorations at a Port Authority board meeting.

“Just move it.” “It’s not right.” “It hurts my brain.” At the @PANYNJ board meeting, Cory Windelspecht read from the comments on his petition that got 2,000+ signatures in 3 days, to put the🎄over the “A” and not the “N” at the Holland Tunnel. #1010WINS pic.twitter.com/dVYSNh9pU4

Port Authority proceeded to host an online survey for “The Great Holland Tunnel Decoration Debate,” and 21,500 voters came out to suggest the Christmas tree should be moved one letter over and the second wreath should be pulled. The changes were made last night, officially turning the “Hollaad Tonnel” back into the classic, iconic “Holland Tunnel.”

Port Authority Chairman Kevin O’Toole and Executive Director Rick Cotton announce that the Holland Tunnel will soon bring more comfort and joy to all who pass through, with the shifting of the Christmas tree over to the A and the removal of the wreath over the U. #HappyHolidays pic.twitter.com/a5NmzsrG3x

The public has spoken! 21,500 votes received in response to our poll! And here is the winning option of The Great Holland Tunnel Decoration Debate! Thanks to everyone who voted! #HappyHollandDays https://t.co/ztTuvKfJ05 pic.twitter.com/iLDW0c5fph

#HappyHollandDays ICYMI: The move of the 🎄 from the N to the A in HOLLAND and the removal of the wreath from the U in TUNNEL. #HollandTunnel pic.twitter.com/TN8TRumhvH

Windelspecht quickly turned to Twitter, celebrating the news. Granted, it wasn’t exactly what he wanted—he didn’t mind the second wreath—but hey, at least the people’s voices were heard.

CHANGE IS HERE AT THE @PANYNJ_HT Thank you @PANYNJ for listening to the people. Thank you @budweiserusa for help getting us noticed, and thank you to whoever voted whether you voted for change or not. Hope you had fun watching this grow, Happy Holidays! pic.twitter.com/hXAVyTK4Ls

Still think option 2 would’ve looked better personally but no one can argue the tree fits better in the A then it did in the N! https://t.co/ZygxFs8hkp

Some New Yorkers and New Jersey residents are celebrating the change.

The people have spoken. We are proud to announce this morning we have #MovedThatTree at our Newark brewery to match the Holland Tunnel. We hope our neighbors feel a sense of pride as they make their way through their #TunnelNotTonnel. @WhosCory join us for a beer to celebrate? pic.twitter.com/CELtymlq93

The people have spoken. The tree is moving, and the second wreath has got to go. https://t.co/YYCe0N74WV

Others are mourning “Hollaad Tonnel’s” death by democracy. At the very least, there could have been another solution.

So how many crashes are we gonna have at the Holland Tunnel this morning caused by people taking pictures of decorations that only ONE GUY cared about a week ago? https://t.co/K3w5Nev4zQ

I will never understand why people wanted to change the HOLLAAD TONNEL but you monsters have finally done it, you've taken away the last piece of Authentic New York https://t.co/hnlXS5Rq5D

OK after all that debate I don't think it looks that much better. THERE I SAID IT and the decorations have been bothering me for 26 years. https://t.co/O8Dhxjoepz

If you ever feel like you’re being extra, just remember that some guy petitioned Port Authority to have the decorations on the Holland Tunnel entrance moved because they annoyed him

I’m pretty sure there is no man out there that would ever care about me the way that guy cares about the Holland Tunnel holiday decorations. And that’s OK.

New York is a dirty mess of a city, and even its newest buildings quickly fall apart. Windelspecht, you’ve found a calling in fixing trivial, mundane problems that get on New Yorkers’ nerves. Maybe it’s time to fix up One World Trade Center next.

Can the Holland Tunnel Guy fix this awning at One World T ade enter? pic.twitter.com/C4kUg8aVvc