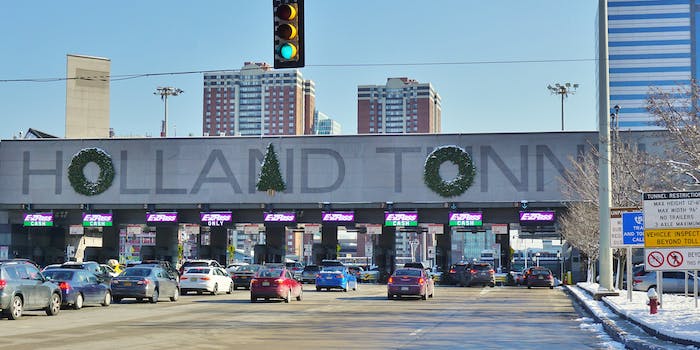 Holland Tunnel decorations are a real nightmare before Christmas

The Holland Tunnel might have been easier to build than decorate.

The Holland Tunnel, which connects New York City to New Jersey via tubes under the Hudson River, was a marvel of engineering when it was first opened in November of 1927.

The concrete and steel tubes run for over 8,000 feet at a depth of around 90 feet below the surface of the water. According to the Port Authority of New York and New Jersey, which controls the tunnel, nearly 15 million vehicles use the eastbound section alone annually.

Given that the tunnel is such an impressive feat of engineering, you’d think the Port Authority could figure out how to place a couple wreaths and a tree when it came time to decorate for Christmas. That task though, as it turns out, is trickier than you might expect.

For years the Port Authority has placed two wreaths and one tree over the entrance to the tunnel on the New Jersey side. These decorations are basically centered over the nine toll booths, but naturally, it was hard to resist the temptation to align that first wreath so it perfectly covers the “O” in “HOLLAND”.

This, as you might have noticed, leads to a bit of a problem, at least from an aesthetic point of view.  If you center the decorations (or well, pretty much center them) that leaves the tree covering the “N” even though every elementary school student could tell you that a Christmas tree is the perfect substitute for the letter “A.”

It also turns the tunnel into a “TONNEL” which, according to Wikipedia is an old French word for barrel. Not exactly Christmasy.

This led Manhattan resident Cory Windelspecht to start a Change.org petition, asking the Port Authority to move the decorations into what he feels is a more pleasing arrangement.

“I am asking you to join with me in asking the Port Authority of New York and New Jersey to move the tree decoration over from the letter N to cover the A.” the petition reads in part “This is the time where ALL PEOPLE should be celebrating and have an opportunity to enjoy the decorations and festivities. This country is divided already, let’s start doing things to bring us back together.”

Mr. Windelspecht said he is also worried that people with obsessive-compulsive disorder could find the decorations triggering.

“OCD is characterized by obsessions and compulsions that take up at least an hour a day—but usually longer—and cause significant distress.,” he writes in the petition “For many people, small things can set off or trigger OCD.”

As of this writing, the petition has gathered 2,215 signatures, with new signatures being added all the time. This has led to the issue going viral, and being hotly debated (and mocked) online.

“And there, N, lies the problem.”@migold slayed the Holland Tunnel decorations, everyone https://t.co/EmvpPILFrS

What the hell is a tonnel???

Many people also took issue with the use of the term “OCD,” saying that obsessive-compulsive disorder is a real medical diagnosis that was being misused in this case.

I have diagnosed OCD and guess what? This is not OCD, maybe read what OCD really is before making these so called articles.

Do you know what OCD stands for?? Obsessive Compulsive Disorder. A serious Mental Disorder. Like when someone has such horrible obsessive thoughts that trigger compulsions and completely destroys their life. Not a FUCKING decoration on the tunnel.

“This seems to be largely about the problem with orderliness, and the tree over the N creates a sense of disorder, in addition to the wreath over the U,” he said. “I can understand that there are some people who would have their symptoms activated by that.”

Although he also noted that most people who are irritated by the placement are not suffering from OCD and that those who are probably have more serious concerns than the decorations.

McKay also mentioned that moving the tree to cover the “A” would throw off the symmetry, and could just as easily create a sense of “disequilibrium.”

All the attention left the Port Authority with no choice but to respond. Instead of simply moving the decorations though, they decided to let the public vote on how to handle the situation. People can now vote on one of four options.

Leaving the decorations as they are.

Moving the tree to hang over the “A.”

Moving the tree and also eliminating the second wreath.

What the hell, just throw an extra tree up there.

As you can see none of these options are perfect. If you move any of the decorations you throw off the symmetry.

If you leave them as they are (or add a tree) you get the “HOLLAAD TONNEL.”

Even if you prefer the symmetrical versions, you’ll notice that the decorations are only centered over the booths themselves, not over the entire sign. And even if you are okay with that, the decorations won’t be entirely symmetrical unless you slightly move the first wreath, which means it wouldn’t completely cover the “O” in “HOLLAND.” Imagine driving past that nightmare.

Perhaps there is a fifth option that would make everyone happy: Completely remove the decorations but drop the toll from a staggering $15 down to a mere $5 for the next month.

That’s sure to put even the grumpiest commuter in the holiday spirit.