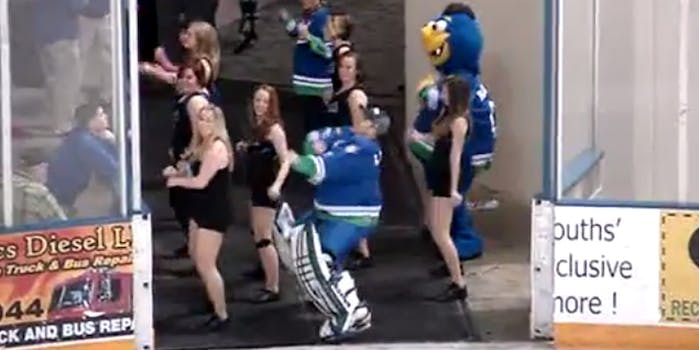 Hockey goalie does the Wobble dance in full pads

It's all in the hips.

Being a hockey goalie takes uncanny flexibility and poise. It’s all in the hips.

Need proof? Here’s goalie Andrew Loewen of the Columbus Cottonmouths doing “The Wobble” in full pads before the start of the third period in a recent Southern Professional Hockey League game. According to uploader Bree Hicken, an instructional video of the dance starring Loewen was shown during the second intermission, and he apparently decided to push all in.

It was actually an notable night on a number of levels. Loewen was the backup that night as Canadian Olympic gold medalist Shannon Szabados made her professional debut and became the first female player in the SPHL.

For the uninitiated, the Wobble takes its name from a single by Atlanta rapper V.I.C. It’s been called the new Electric Slide, and it’s a bit of a YouTube phenomenon, with countless how-to videos.

Even the cops in New Orleans are hip to it.