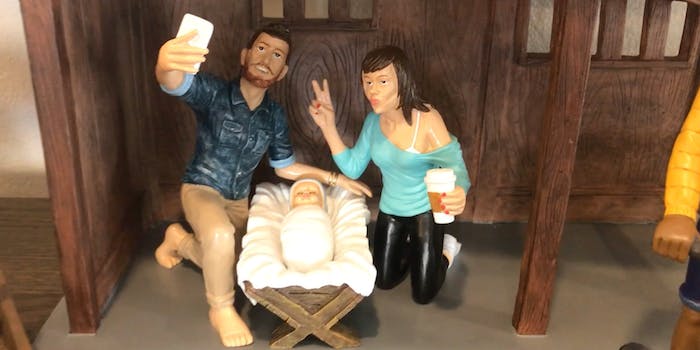 It's a freakin' miracle.

The holidays are upon us, which can only mean one thing: nativity scene figurines.

One of the hottest sets on the market this year is none other than Modern Nativity, an updated recreation of the birth of Christ featuring hipsters.

It’s like in the Bible, but instead of being born in a manger, Jesus is born in a shed equipped with solar panels. Also, Joseph is rocking a man bun for some reason, Mary is taking a duck selfie, and the three Wise Men are holding boxes from Amazon Prime instead of gold, frankincense, and myrrh.

This 21st-century update is the brainchild of Casey Wright from San Diego, California, who says it came to him after a night of drinking with his friends. “After a few beers, we started joking about how religions would be different if their sacred texts were set in modern times,” Wright told Mashable.

The response has been polarizing. “We’ve gotten everything from, ‘Oh, you’re going to Hell’ to ‘You guys are totally reinventing the way we think about Christmas,’” he said to local news affiliate NBC 7.

While the figurines might be somewhat on the questionable side—the Wise Man dressed in a Zoot suite, in particular (like, where is his jacket even?)—but people are buying them. According to Wright, they’ve been selling about 500 sets a day, which is some pretty sweet coin when you take into account the fact that they cost $130 each.