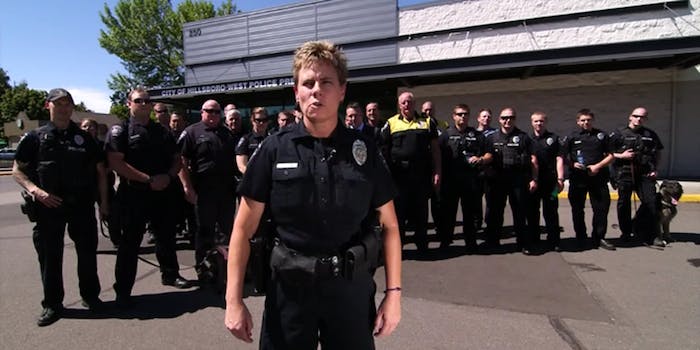 Who wouldn’t want to be a cop after watching this recruitment video?

The Portlandia winds have come blowin’ in.

Hillsboro, Oregon, is a coastal city situated just west of Portland, but from the looks of their recruitment video for a new police chief, the Portlandia winds have come blowin’ in.

Earlier this year, Hillsboro police chief Carey Sullivan resigned amid “a pending lawsuit brought by an officer against the agency and two unfair labor practice complaints.” Instead of hiring internally, the City of Hillsboro created this six-minute video, which attempts to illustrate all the reasons you might want to be police chief.

We get to ride along on a real-deal emergency call with “Dwayne,” the perpetually arrested Ronnie Dobbs-esque character. The officers take us to “their Xanadu,” the west precinct, where we get to know detectives, dispatchers and new officer recruits.

”Someday I hope I have the privilege to be arrested by one of these fine gentlemen,” says a female officer.

We ride around Hillsboro, taking in the city’s recreational and downtown life. We later run into Dwayne, who is “not supposed to be within 100 feet of a school.”

“I’ve been arrested in a lot of cities,” Dwayne says. “But Hillsboro police department is top notch.”

As the officer goes on to say, they like to “have fun.” Even the sex offenders are cool! If you think you might be a good fit, recruitment has been open for a week now.