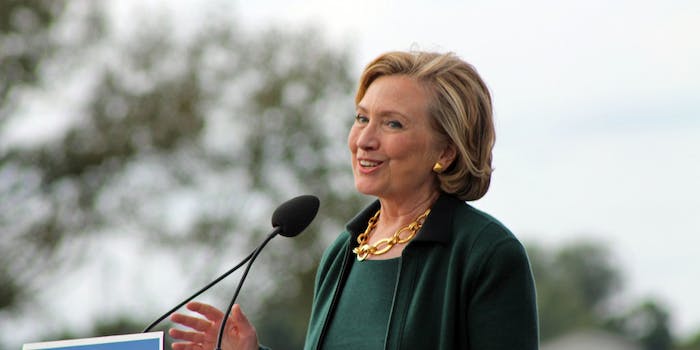 Could this kill her race to the White House?

With polls giving her a four-to-one lead over her closest rivals, it would seem like Hillary Clinton has good reason to be optimistic about her recently announced presidential campaign. After all, she is quite literally the odds-on favorite.

However, although her frontrunner status will almost certainly give her huge advantages in fundraising, attracting attention from the media, and cultivating grassroots support, it could also turn out to be her greatest political liability. This is a lesson that presidential candidates have learned throughout American history, one with which Clinton herself has had a great deal of experience. It’s not just that the Internet views her as “inevitable”—it’s that we don’t like frontrunners in politics.

“It’s a huge challenge for anyone in her position to break out of classic frontrunner’s mode,” writes Scot Lehigh of the Boston Globe, noting that “an establishment frontrunner almost always ends upswith an electoral approach designed by committee and governed by caution.”

As pollster John Zogby succinctly explained in an editorial for Forbes, “The fact is that more often than not, Democratic voters tend to chew up and spit out their early frontrunners.”

She is quite literally the odds-on favorite.

The most recent Democratic presidential candidate to fall prey to this tendency was Clinton herself, who lost to Barack Obama in a protracted primary battle for the 2008 nomination, one that many experts had assumed she’d already sewn up. Sixteen years earlier, Clinton’s husband became known as the “Comeback Kid” after pulling off an upset victory over Paul Tsongas in the 1992 New Hampshire primary despite being plagued with scandals.

The Clintons even cut their teeth working in national politics by joining her husband in campaigning for a candidate, George McGovern, whose success in being nominated was largely due to the implosion of frontrunner Edmund Muskie.

Although Republicans have historically been less likely to choose an underdog candidate over an establishment favorite, they’re still not entirely free from this trend. Mitt Romney may have been the frontrunner for most of the 2012 Republican primaries, but the formidable challenges he faced from the right by Rick Santorum and Newt Gingrich allowed him to present his nomination as something other than inevitable. Despite being the clear winner, Romney looked like an underdog.

One reason frontrunners often have trouble getting nominated is that they have more to lose and less to gain by doing well in the early primary states. Clinton, for example, will be expected to trounce all of her opponents in the early primaries to retain her current dominant status among the Democratic candidates. Meanwhile, all any of the “underdogs” must do to be viewed as a potential challenger is gain national attention with a surprise victory in one or more of those same contests.

Despite being the clear winner, Romney looked like an underdog.

Since gaining momentum in the early primaries is essential if a candidate wishes to be competitive in the later states, frontrunners need to either “close the deal” right away by decisively winning all of the early primaries or, barring that, bounce back as quickly as possible after suffering as few defeats as possible. Just ask Rudy Giuliani, who sat out the early Republican primaries in 2008 only to discover that McCain and Romney had acquired most of his supporters by the time he actually appeared in one of the races.

“It’s like a football game in which you say to the first team that makes a first down with ten yards: Hereafter your team has a special rule. Your first downs are five yards,” explained Morris Udall, a Democratic congressman whose frontrunner status was used against him by Jimmy Carter in the 1976 election. “And if you make three of those you get a two-yard first down. And we’re going to let your first touchdown count twenty-one points. Now the rest of you bastards play catch-up under the regular rules.”

Frontrunners are also weakened by the fact that they are automatically one of their party’s most prominent targets. Democratic Party liberals have already started criticizing Clinton. Even though she is far from the most conservative voice in her party, progressives who disagree with aspects of her record may feel especially compelled to air those grievances because her nomination is perceived as inevitable.

Republicans, on the other hand, demonstrated their preparedness for her candidacy by launching a series of videos as soon as Clinton’s announcement became official.

In Clinton’s case, her frontrunner status may also become a liability for a reason that is unique to this specific election. Although America has had a handful of families which produced more than one president in their direct lineage—the Adamses, the Harrisons, the Roosevelts, and the Bushes—2016 may become the first election in which the beneficiary of one potential dynasty, Hillary Clinton, runs against the beneficiary of another dynasty, Jeb Bush.

Because Americans have never faced this kind of choice before, it’s impossible to predict how primary voters might rebel against it. At least theoretically speaking, though, widespread voter rejection of presidential families could just as easily hurt against Clinton as it could Bush.

Americans have never faced this kind of choice before.

Perhaps the most apt analogy for Clinton’s conundrum can be found from a much earlier campaign in American history. When Ulysses S. Grant decided to seek a third presidential term in 1880, he initially received so much support from both establishment politicians and ordinary Republican delegates that his bid seemed unstoppable. But as one historian later wrote, “The balloon [of support for Grant’s third term] was at its maximum. It was impressive as balloons went but could burst more easily than expand.”

Like all frontrunners, Clinton will need to make sure her campaign has more room to grow than it does to deflate. In addition, like Grant, the fact that her mere candidacy can be easily viewed as inherently undemocratic—in Grant’s case by seeking a third term and in Clinton’s case by creating America’s second presidential dynasty in less than thirty years—will increase the preexisting pressure that already thrust upon her by virtue of being the frontrunner.

Clinton might look like a lock now, but if there’s one thing you can bet on in Washington, it’s that you can’t bet on anything.