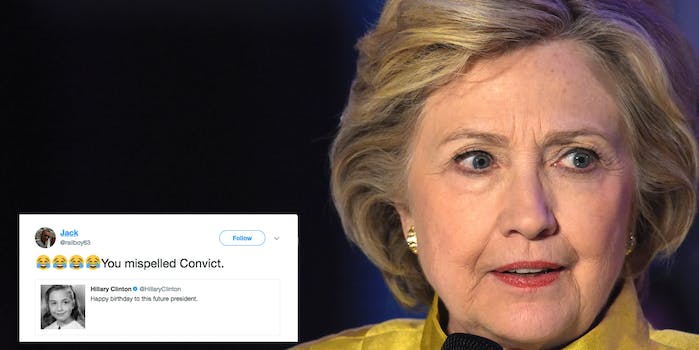 It's a tweet that will surely haunt us every year on Oct. 26.

Today is Hillary Clinton‘s 70th birthday, and you would think most people in American society would be content with politely nodding at that fact and moving on with their lives.

But, boy, oh boy, would you be severely underestimating the amount of hate Hillary Clinton engenders among a good deal of conservatives.

Because they are using her birthday to drag her through the mud.

It all stems from a clunkily worded tweet sent a year ago in the run-up to the election.

It was probably a social media manager, and not Hillary herself, who posted this tweet, but anyway, she certainly thought she was going to win, as did everyone else. Not the worst tweet at the time.

But now, a year and a stunning election loss later, it’s become a Twitter meme.

Lots of people went the “lock her up” route because that’s still a thing.

Some wanted Trump to troll his former opponent, a task he’s never shied away from.

Man @realDonaldTrump HAS to retweet this today https://t.co/3PpSYdJ96i

Some were just surprised her social media manager left it up.

I'm shocked she never deleted this one. https://t.co/5ka2DtVlLH

How has this not been deleted? LMAO https://t.co/aGGUzru1hZ

Even Julian Assange got in on it because that dude has nothing else left to do but tweet.

Anyway, while Clinton has categorically denied she will run again for president, it would be funny if she ran again, won, and then RT’ed the shit out of this from her desk at the Oval Office on Oct. 21, 2021.

That would be the ultimate own.