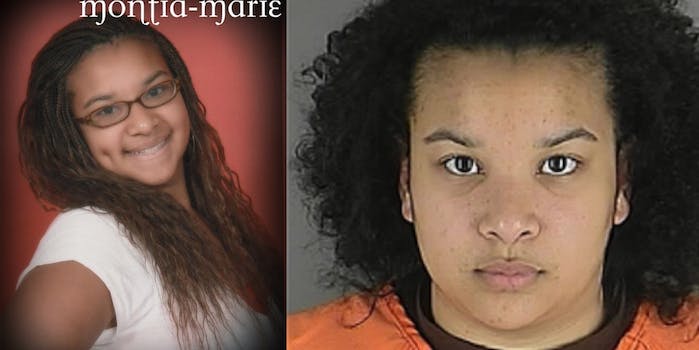 Backpage is a Craigslist-style open listing website with a well-trafficked Adult section. Anyone can post there if they claim to be an adult—including Minnesota high school cheerleader Montia Parker, who offered sexual services online.

But Parker wasn’t offering her own sexual services. She was exploiting her fellow cheerleading teammate, a 16-year-old girl who police say is a special education student.

The 18-year-old Parker faces charges of sex trafficking, solicitation, and promoting and inducing prostitution after she allegedly drove the 16-year-old to a man’s apartment to have sex, then took the money the girl made.

The victim, who has a developmental cognitive delay, according to her mother, thought that Parker was joking when she suggested that in order to make money, she might perform oral sex.

Parker had encouraged her teammate to send her pictures of the teammate posing in outfits that “show a little skin.” Playing along, the teammate complied.

When Parker contacted her on Facebook later with an organized meeting, however, the joke became a nightmare.

Parker got the teen out of school by pretending to be her mother. The teen refused to perform sexual acts, despite Parker allegedly telling her, “I didn’t drive up here for nothing, and eventually, you will need to have sex.”

Backpage has long come under fire for harboring prostitution and solicitation. In 2011, the Seattle Police Department found that out of numerous sites under investigation, only Backpage, which is owned by the Village Voice Media (VVM), contained ads for juvenile prostitution. In response, VVM declared it had cracked down on Backpage’s monitoring procedures to insure that no illegal activity was occurring.

But the measures may have only gone so far. Apparently no one on Backpage’s staff caught Parker’s ad, which listed her own phone number and email address. And as recently as a month ago, a Philadelphia police operation arrested four people in a Backstage prostitution ring.