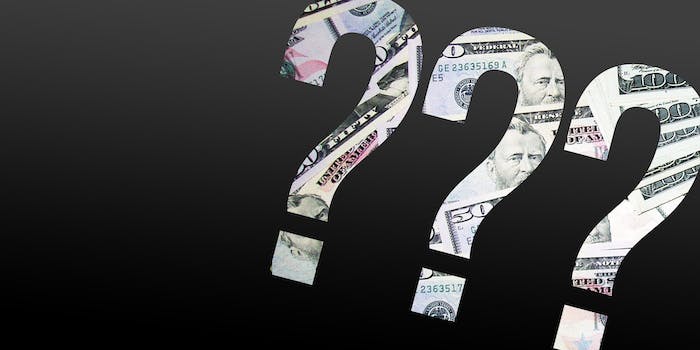 Revealed: The Indiegogo employee and the housing magnate behind @HiddenCash

The creators of the account have finally stepped forward.

Since its emergence in May of this year, “Hidden Cash” has become a worldwide phenomenon. But now, the creators of the mysterious account have stepped forward.

Starting with one enigmatic San Francisco-based Twitter account, @HiddenCash, pretenders quickly sprung up across the globe. The premise of “hidden cash,” for those not in the loop, is simple: It’s hidden cash. The account operator hides a stash of local currency somewhere in their city—often $100 or more—and posts a cryptic clue or photo on Twitter that treasure-hunters can use to track down the jackpot.

The original, @HiddenCash, has now reached almost three-quarters of a million followers on Twitter, so it’s fair to say this “anonymous social experiment,” as it brands itself, has been a resounding success.

But the account is anonymous no longer. In June, Inside Edition claimed they had the inside scoop, making unconfirmed claims that real estate tycoon Jason Buzi was behind the account. Now, the founders—there are two of them—have come forward voluntarily, revealing their identities and motivations to TechCrunch.

At least Inside Edition can tell themselves they were half right—Buzi indeed comprises one half of the operation, with the other being Yan Budman, the Director of Marketing at crowdfunding website Indiegogo.

Old friends, Buzi and Budman were first inspired to start the project after Buzi “came into a little money from a  business deal,” TechCrunch reports.

After being rebuffed trying to give money to a homeless man, Buzi joked that in future, “we’ll just hide money around.”

The duo hopped on Twitter, and early experiences of discoverers promising to “pay it forward” meant that very quickly, Budman says, “addiction set in.”

The project rapidly ballooned, their followers on Twitter rocketing into the hundreds of thousands. They’re been approached for a potential TV show, and they’ve personally dropped $50,000 across more than a dozen cities, from Houston to London.

“We want to keep it growing without selling out,” Budman says.

TechCrunch raises some valid questions—”if someone can afford a smartphone and data plan, how badly can they really need the money?”—but these are largely brushed aside. “For a lot of people, $100 isn’t a game-changer,” says Budman, but somewhat nebulously claims “it can generate a ripple effect that creates a less selfish society.”

Similarly, the darker side of Hidden Cash reared its ugly head when a hunt in a Californian Park led to a stampede by nearly a thousand people, trashing the park and causing several thousand dollars-worth of damages.

The Twitter account @HiddenCash and its founders delight in the vague claims of “paying it forward,” but it’s undeniable that if this were truly a charitable project there would be far better uses for the cash that is encouraging Twitter-users’ latent greed. Is it really about “inspir[ing] others to do the same”—or just stoking the egos of two rich San Franciscans, watching people fight over their spare change?