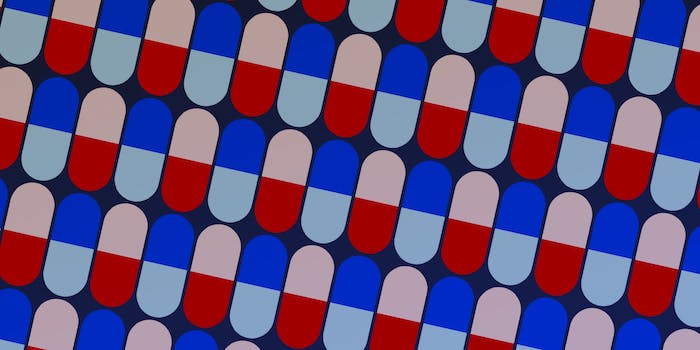 This should be the Internet's next big political movement.

This week, Ireland took a bold step in ending the war on drugs: The nation announced this week that—as part of a broader program to decriminalize not only cannabis but cocaine and heroin—the country will create specially designated rooms in Dublin where addicts can safely and legally inject themselves with small amounts of their drugs. This plan coincides with recent bill introduced by Sen. Bernie Sanders (I-Vt.) to legalize recreational marijuana—to which the Internet responded with predictable enthusiasm.

This is what a real politician does. Even while he's campaigning for the presidency, he's still doing his damn… https://t.co/vD9QrhajKA

if you don't like my fire, then don't come around, cause i'm gonna' bern one down. https://t.co/9sbFcNGaD9

This generation has largely fueled the movement to legalize marijuana in the U.S—with states like California, Maine, and Maryland allowing personal use of cannabis. And it’s time for the Internet to follow Ireland’s lead by pushing for the decriminalize heroin.

The country will create specially designated rooms in Dublin where addicts can safely and legally inject themselves with small amounts of their drugs.

For one thing, the underlying issues involved in Ireland’s new policy on addressing heroin addiction are very similar to the ones at play when it comes to marijuana legalization. In a recent speech explaining his position on pot, Sanders explained that there is a racial dimension to the issue. “Although about the same proportion of blacks and whites use marijuana, a black person is almost four times more likely to be arrested for marijuana possession than a white person,” he argued.

The same is true for harder drugs: Statistics show that drugs more likely to be used by racial minorities (e.g., heroin) are given particularly severe punishments, and African-Americans are more likely to serve time than whites for the same drug-related offenses. As T. C. Sottek of the Verge put it, “the war on drugs is one of the reasons blacks make up just 13 percent of the population but roughly half of all prison inmates.”

The war on drugs also helps explain why police tactics have become increasingly militarized. Because America’s drug policy focuses on arresting offenders rather than providing addiction treatment, police officers are inevitably encouraged to come up with increasingly sophisticated ways of putting drug users behind bars.

As recently as last year, the United States Department of Defense provided $4 billion in surplus military equipment to local police for free in part to more effectively apprehend drug dealers and users. “The war on drugs has created a culture of violence and puts police in an impossible situation,” explained Sen. Rand Paul (R-Ky.) in a speech during his 2016 presidential campaign.

Finally, America’s current approach to combatting drug use is needlessly expensive. Although the United States only contains 5 percent of the world’s population, it holds 20 percent of its prisoners, making it by far the world’s largest jailer. As of 2013, this cost taxpayers $40 billion each year, with much of that money going into the coffers of the private corporations that build our prisons. Many of these groups actively (and successfully) push for harsher drug policies because they know it will increase the number of inmates and, thus, help their bottom line.

Yet while all of these facts strongly suggest America needs to reevaluate its drug policies, none of them prove that the Irish approach should be considered as a substitute. There is a very simple reason why that is the case: It works.

This brings us back to the fundamental question: Is the ultimate objective simply to punish people or to reduce drug abuse and help its victims?

While it may seem counterintuitive to give free heroin to heroin addicts, the symptoms of heroin withdrawal are so serious that it is often practically impossible for severe addicts to overcome them. As a result, European countries like Switzerland, Germany, the Netherlands, and the United Kingdom have set up programs where chronic abusers can take heroin injections under medical supervision and receive regular counseling.

In Switzerland, this almost immediately resulted in a noticeable decline in the crime rate, including a 55 percent drop in vehicle thefts and 80 percent fewer muggings and burglaries. Meanwhile, less than 15 percent of the program’s patients relapsed back into daily use. Similar results have been reported in the other European countries that have adopted this approach.

This approach isn’t without its critics, of course. After a similar program was implemented in the Canadian city of Vancouver, Al-Jazeera correspondent Allen Schauffler argued that the policy was comparable to blackmail.

“What it says to these people is, ‘Yep, you are heroin addicts. A certain number of you, the most severely addicted are heroin addicts, you’ll always be heroin addicts, there is no hope of you getting off heroin, therefore let’s provide you with heroin so you are the least dangerous drug addict you can possibly be,’” he wrote. “It’s a very odd… moral line to walk.”

While there is merit to these concerns, even critics like Schauffler acknowledge that most of the addicts who use the program claim to have been helped by it. Considering the program’s success, it makes sense that Ireland would implement a similar initiative as part of what the country’s chief of National Drugs Strategy referred to as “a radical cultural shift.”

This brings us back to the fundamental question: Is the ultimate objective simply to punish people or to reduce drug abuse and help its victims?

If America aims to do the latter, then it will be necessary for our leaders to implement bold, even unorthodox approaches to this problem. In this respect, the policy of offering safe spaces for heroin addicts to use in moderation has the dual advantage of both being known to work and reducing the stigma associated with drug use. After all, by treating the heroin use as a disease to be treated rather than a crime to be punished, countries like Switzerland and Canada have simultaneously improved the lives of drug abusers and significantly reduced violent crime rates.

Should the Internet be looking for its next great cause, marijuana legalization supporters should look no further.