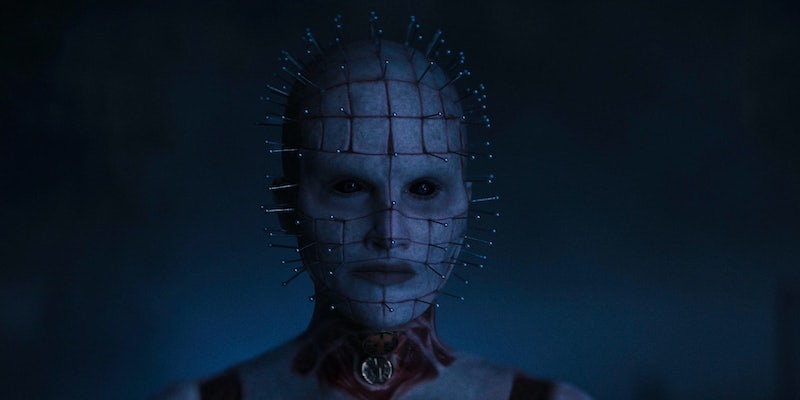 We’re living in the age of classic horror reboots, and they’re usually either a big miss or a welcome return to a franchise. The new Hellraiser, which streams on Hulu starting Oct. 7, is, fortunately, the latter. It’s been 35 years since the original Clive Barker movie was released. Nine sequels followed, but you don’t need to watch any of them to understand the 2022 film. That’s because the new Hellraiser is a fresh start, delivering a sharp horror story that will satisfy both fans of the original and viewers who know nothing about Cenobites.

Release Date: Oct. 7, 2022
Director: David Bruckner
Streaming: Hulu
The new ‘Hellraiser’ proves how to do a reboot with a simple horror plot.

The best thing about 2022’s Hellraiser is that it gives a lot of screen time to its extradimensional beings, the Cenobites. The design of these characters is stunning, and as director David Bruckner explained in a Q&A following the screening at Fantastic Fest in Austin, Texas on Wednesday, they chose to forgo using leather outfits like in the original because leather seemed like an outdated symbol of sadomasochism. Instead, these Cenobites wear skin, pulled and mutilated in different designs. The most notable character in the franchise, Pinhead, was famously played by Doug Bradley in the original. In the new film, Pinhead is played by a woman, Jamie Clayton, who brings an ethereal quality to the character. Clayton’s Pinhead voice is perfectly calm yet menacing, and it’s most effective when a character hears it down a dark hallway. It’s a voice that reminds me of horror films of the ‘80s and ‘90s.

The plot of the new Hellraiser is simple: A young woman named Riley (Odessa A’zion) is recovering from addiction while living in an apartment with roommates, which includes her brother, Matt (Brandon Flynn). While lamenting needing to look for a new job, a man she’s been hanging out with, Trevor (Drew Starkey), suggests that they go break into a warehouse and steal items wealthy people ship in. This, naturally, is how they get their hands on the puzzle box, the object that summons the Cenobites and opens a portal to another dimension. Riley is fascinated with the object and begins playing with it—which sets the horror premise into motion. People begin disappearing, and Riley is determined to use the box to bring one of them back.

Unlike its predecessor, though, this film offers a different message on using a magical object to grant a wish. It also humanizes the Cenobites, who only appear when a human calls on them.

Hellraiser is full of blood, torture scenes, and close-ups of the decorated Cenobites. The actors playing the young group who become involved with the puzzle box are all good, but the actors playing the Cenobites are the real standouts here, as well as Goran Višnjić, who is a believable villain. It’s a horror film that deserves to be seen on a big screen, so it’s a little confusing why it’s being released exclusively on streaming (the same can be said for Hulu’s Prey). But this film—along with Megan Thee Stallion’s Pinhead costume from last Halloween—will likely inspire a lot of Hellraiser costumes this year.