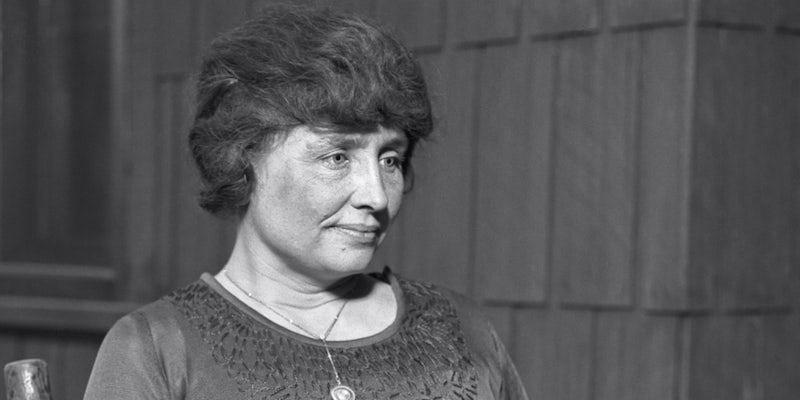 What the heck is going on with TikTok and Helen Keller?

Teens say the videos are just 'jokes,' but the theory has been around for months.

TikTok, like all social platforms, is ripe with conspiracies and half-truths. But one of the oddest theories on the app concerns Helen Keller, and posits that she never existed.

The theory isn’t exactly new, but a recent viral tweet thread reignited discussion. On Tuesday, Daniel Kunka posted that, via a group chat with his teenage nieces and nephews, he learned that they don’t believe Keller existed. Or that if she did, she was a fraud.

Keller, who died in 1968, was left deaf and blind after an illness at age 2, but was able to learn to communicate over the span of two decades thanks to her teacher, Anne Sullivan. Their early relationship was dramatized in the 1962 film The Miracle Worker, and Keller went on to attend college and become an activist and advocate, co-founding the American Civil Liberties Union in 1920.

A now-deleted TikTok from May 2020 seems to have fueled some of the early misinformation. The user, @alleyesonharshita, reportedly questioned Keller’s existence, adding the hashtag #helenkellerwasntreal, as well as documented events in Keller’s life—like writing books and flying a plane. Other similar videos followed, some of them getting hundreds of thousands of views. A majority of the top videos under #helenkeller are people making jokes about her being blind.

That same month, Isabella Lahoue, author of the book Lights Out: Shining for Christ in a World of Darkness, wrote about the TikTok trend. The content of the Keller truther videos could certainly be construed as (poorly done) satire, but Lahoue cited Gen Z’s reliance on the internet for information and “truth” in the era of “fake news.” She mentions Gen Z’s dedication to activism and change, then promptly erases Keller’s role as an activist and agent of change: “We don’t have to believe in Helen Keller, and it shouldn’t be surprising if we don’t.”

A more recent TikTok from December continued the trend, calling Keller a “liar”—though the poster’s bio states, “Purely Satire.” While “It’s just a joke” or “It’s just satire” are easily deployed as a defense, as Kunka stated in his thread, his nieces and nephews did not appear to be joking about their beliefs, showing how easily “It’s just a joke” can devolve into shared ignorance. The hashtag #helenkellerisfake has more than 3 million views on TikTok.

“This isn’t from lack of education or empathy,” Kunka wrote. “This is more about how group think can travel through social media like a virus until it suddenly just becomes the truth I think.”

On Twitter, members of the Deafblind and visually impaired community shut down the baseless, ableist theory. Activist Dr. Amy Kavanagh wrote: “I’m blind & grown adults are SHOCKED all the damned time that I work, own a home & can use the Internet.”

Even more bizarre: Keller’s museum in her birthplace of Tuscambia, Alabama, was cyberattacked three times in 2020, starting in May, though it’s not clear if there’s a connection to the theory.