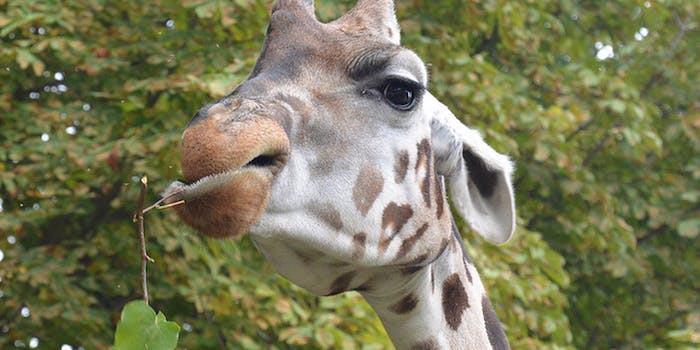 You guys. With the fucking giraffes.

When I first started to see giraffes pop up in my Facebook feed, I didn’t bother to find out why they were emerging. Some wondered if it actually was a virus, but I figured it was a lame, tiresome meme that I would despise.

Am I the only one who hates riddles? Riddles, brain teasers, mind-benders, whatever you want to call them: I can’t stand them. I never have. They’ve always rubbed me the wrong way. Jokes, fables, ghost stories, tales with a long lead-up, I’m fine with, especially if they’re told well. (And even a clumsily told joke can be endearing.) But riddles? They’re inane if posed by anyone over the age of four. And riddles that are there with the express purpose of making others feel stupid? They’re there for the smug—who, come on, most likely had to read the answer key first. Am I dumb? Probably. But I don’t need a riddle to tell me that.

Having your picture as a giraffe screams, “Hi! I don’t get it!”  (Although: We already gathered that from your Facebook posts.)

But the giraffe also screams, “Hi! I’m irritating because I like goddamn riddles!”

I don’t want your brain teasers, your puzzles, your riddles. They’re not going to keep me sharp in my old age. What’s going to keep me vibrant and alive into my golden years is avoiding the stress that comes from dealing with people’s expectant, self-congratulatory, godawful riddles.

And also? The Internet has given us access to so many wonderful animals. Why a giraffe? Why not a honey badger? Or a mantis shrimp? If you want random animals, why not a capybara? Or a tapir? Puffins! What about a spider monkey?

Because it’s just one more annoying thing about this annoying riddle. I can’t wait until it goes extinct.