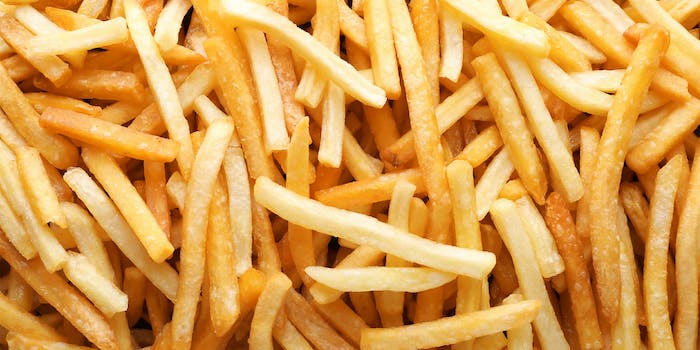 A Harvard professor said you should only eat 6 French fries, but people aren’t having it

People are pretty salty about the whole thing.

French fries are just one of the many ways potatoes are enjoyed. They come in all sorts of shapes and sizes, which is all the more reason people love eating not just a few, but several fries with their meals. We all know fries aren’t exactly good for us, but how bad can they really be? Very bad, apparently.

Harvard professor Eric Rimm, who affectionately calls our beloved fries “starch bombs,” told The New York Times in an article published last week that we should only be eating six fries in one sitting. Yes, you read that correctly. Can you imagine only eating six fries?

“There aren’t a lot of people who are sending back three-quarters of an order of French fries,” he said. “I think it would be nice if your meal came with a side salad and six French fries.”

A study in The American Journal of Clinical Nutrition last year also found that people who ate fried potatoes two to three times a week were at a higher risk of death. So maybe we should be eating fewer fries, but that doesn’t mean anyone is going to listen.

“It’s too bad in this country you’ll pry them from my cold dead hand,” Rimm told the Times of American’s appetite for fries.

And he’s right. Last year, a woman went as far as to start “a campaign of justice” after being served six fries, which goes to show people will not stand for so few fries. Needless to say, people still weren’t happy about this news.

I don't eat fries every week.
Or even every month.
But dang it, when I DO eat fries, I want heaps of fried goodness with ketchup.
SIX FRIES?
Harumph, I say.

I hate this kind of advice. If you want to say "French fries are bad for you, you shouldn't eat them," okay, fine. But six? NO ONE will eat six French fries and be like "thank you, I'm good!" It's a bullshit expectation.

I don't have time for this kind of negativity in my life right now https://t.co/zFCFvhKMD2

In the same article, Elaine Magee, author of 25 books about nutrition and healthy cooking, suggested savoring the flavor of each fry in order to eat less. “If you eat French fries that way, you will probably be satisfied with 10,” she said.

Next time I eat fries, I will think of this and probably still eat like 20 of them.