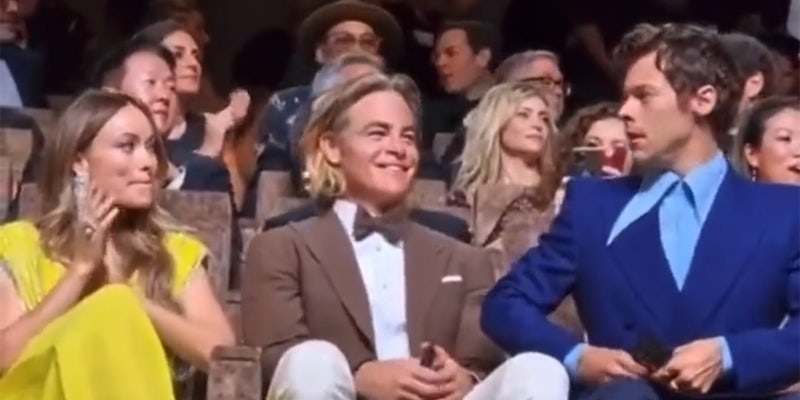 'Don't Worry Darling' is already the most scandalous movie of the year—but did this spitting incident actually happen? We investigate.

The backstory behind this alleged (and possibly nonexistent) spitting incident is long and complicated, with Chris Pine as a tertiary figure in Don’t Worry Darling’s tangled web of scandals.

But before we get into that, let’s peruse the video in question. It shows Pine and director Olivia Wilde already sitting down at the premiere screening, and Harry Styles joining them. (Notably, Pine is sitting between Styles and Wilde, who have been dating for over a year.) As Styles bends down, he makes a gesture that some people interpret as him spitting in Pine’s lap, with Pine pausing briefly before smiling into the distance.

This clip is currently being analysed with Zapruder-like intensity, slowed down and repeated as people try to figure out what’s going on. It does indeed look like Styles might be spitting on Pine. However, when you look at the scene from another direction, the situation is far less clear. Viewed from the side, this interaction looks like a total non-event:

If you think a salival altercation took place, you must consider Styles’ potential motive. There’s little evidence of a Styles/Pine feud—although many spectators do believe that Pine supports Florence Pugh in the apparent conflict between her and Wilde.

Update Sept. 6, 1:30pm CT: A rep for Chris Pine told People that the spitting allegations are a “complete fabrication and the result of an odd online illusion,” adding that there’s “nothing but respect between” Pine and Styles.

A brief and messy history of Don’t Worry Darling

Don’t Worry Darling‘s problems began early on. Wilde initially cast Shia LaBeouf in the co-lead role as Pugh’s husband—several months before he was accused of domestic abuse, although he already had a history of violent and erratic behavior. At any rate, LaBeouf left the film before filming began. He was replaced by Harry Styles, who began dating Wilde—a relationship that reputedly played a role in Wilde’s split from Jason Sudeikis.

In recent weeks, the film’s pre-release promo cycle was marred by rumors of a conflict between Wilde and Pugh, tying into LaBeouf’s abuse scandals. Wilde gave the impression that she fired LaBeouf due to his “combative energy,” saying it was her duty to “protect” her cast and crew. But this was called into question when LaBeouf released messages between Wilde and himself, re-framing the story as LaBeouf quitting while Wilde asked him to stay.

In a video message, Wilde says LaBeouf’s departure could be “a wake-up call to Miss Flo,” encouraging Pugh to “commit” and heal some kind of rift between herself and LaBeouf. This made Wilde seem disingenuous, sparking accusations that she supported a violent abuser while presenting herself as Pugh’s feminist protector. It was easy for people to take Pugh’s side here, as LaBeouf made life hell for certain co-stars in the past.

In the wake of this revelation, fans are speculating that Pugh wants to distance herself from Wilde.

This week, Pugh skipped Don’t Worry Darling’s awkward Venice press conference, citing scheduling conflicts with her role in Dune 2—a transparently flimsy excuse, because Dune star Timothee Chalamet has been frolicking around Venice for several days. She arrived just in time to attend the premiere, looking footloose and fancy-free while Wilde refused to answer questions about LaBeouf.

But where is Chris Pine in all this, you may ask? Minding his own business, apparently. He and Gemma Chan play supporting roles in Don’t Worry Darling, joining Styles and Wilde for the Venice press junket. His strategy was to show up in a series of cute outfits and keep his mouth shut.

Pine’s presence at Venice has attracted a lot of attention because his behavior is so open to interpretation. He hasn’t explicitly weighed in on the Pugh/Styles/Wilde feud, but people are happy to read into his silent reactions during press events. Film Twitter is full of jokes about Pine “dissociating” while surrounded by unwanted drama, highlighting the contrast with his typically-enthusiastic presence on press tours.

Plus, of course, Pine was visibly overjoyed to greet Florence Pugh on the red carpet, snapping photos with a disposable camera. Meanwhile, Styles and Wilde attended separately. The premiere concluded with Pugh turning away from Wilde and leaving the room before the audience had finished applauding, truncating their standing ovation to a mere four minutes. As for the movie itself, Don’t Worry Darling is earning mediocre reviews—although Pugh’s performance is being praised as the standout element.

So, did Harry Styles spit on Chris Pine? The jury’s still out, although if you allow me to editorialize for a moment, I think the answer is “probably not.” While Styles has had a messy few weeks, it isn’t “spit on your co-star in front of zillions of cameras” levels of mess. Plus, this seems like a classic case of people scrutinizing an ambiguous piece of footage and then amplifying the most exciting interpretation possible.

After Styles sits down, other clips show him smiling and chatting cordially to Pine, and nudging Pine in amusement when the movie begins. Pine also appears to be on friendly terms with Wilde. And sure, these people are actors, so maybe they’re all faking it. But the alleged spitting incident seems more likely to be a product of social media, as fans look for more drama in an already-dramatic scenario.

Echoing their other Venice events, Pine appears to be sitting between Styles and Wilde specifically because he’s not feuding with either of them. Rather than seating the three top-billed stars together, the premiere places Pine and Gemma Chan as neutral buffers between Wilde, Styles, and Pugh. So while there are undoubtedly some conflicts here, Pine seems like more of a bystander than a participant.

The Daily Dot has reached out to Chris Pine and Harry Styles’ representatives for comment.