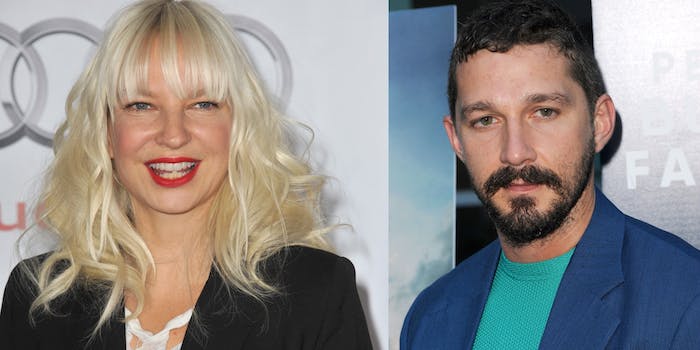 FKA Twigs recently came forward with accusations of sexual battery as well as physical and emotional abuse against the actor.

Singer Sia is voicing her support for FKA Twigs, claiming she was “conned into an adulterous relationship” with actor Shia LaBeouf.

Earlier this week, singer FKA Twigs came forward with accusations of sexual battery as well as physical and emotional abuse against the actor. She filed a lawsuit in Los Angeles on Friday alleging LaBeouf knowingly gave her an STD and abused her—both physically and emotionally—during their brief relationship in 2019.

On Twitter, Sia wrote in support of her claims, writing: “I too have been hurt emotionally by Shia, a pathological liar, who conned me into an adulterous relationship claiming to be single.”

It’s unclear when Sia and LaBeouf dated or when they were in a relationship. The actor appeared in her music video, “Elastic Hearts,” though reports say Sia was married to documentary filmmaker Erik Anders Lang at the time. The couple separated in December 2016.

One incident in Twigs’ lawsuit occurred in early 2019. She claims LaBeouf was driving recklessly and threatened to crash if Twigs didn’t profess her love for him. After begging to get let out of the car, he pulled over at a gas station and assaulted her, according to the lawsuit.

She said she didn’t go to police first out of fear of harming her career and not being taken seriously. LaBeouf said in an email to the New York Times: “I’m not in any position to tell anyone how my behaviour made them feel. I have no excuses for my alcoholism or aggression, only rationalisations. I have been abusive to myself and everyone around me for years. I have a history of hurting the people closest to me. I’m ashamed of that history and am sorry to those I hurt. There is nothing else I can really say.”