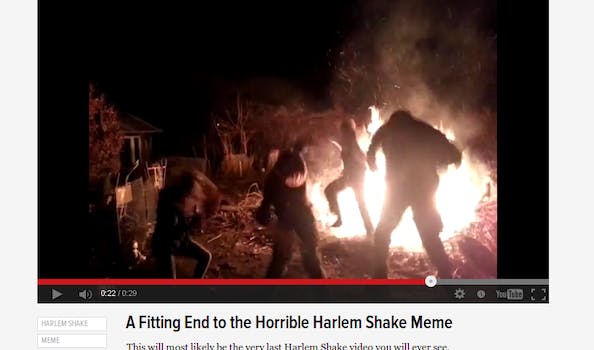 This is the Harlem Shake video of your dreams

This is how all Harlem Shake videos should end.

This video of an awkward German in overalls falling into a bonfire at the culmination of a Harlem Shake dance routine is the only good video of the Harlem Shake ever made.

The video’s uploaders want you to know it’s just fine to laugh, that “not much has happened,” which presumably means the guy didn’t die. Gawker claims he walked away with just blisters, though we didn’t see that mentioned anywhere on YouTube.

So, yes, go ahead and laugh, because you deserve it. You’ve watched other Harlem Shake videos, felt the panicked horror. You’ve dreamed of these videos ending in apocalyptic fireballs, in earthquakes, in roving black holes that suck the dancers into other dimensions where they remain for eternity. This is for you, person who watches videos on the Internet.