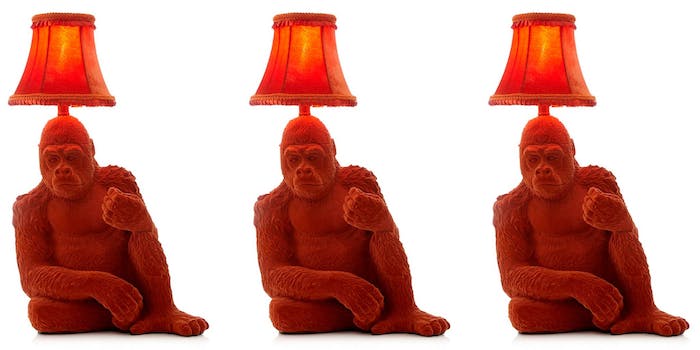 If you don’t own this Harambe lamp, it’s time to rethink your life

Shades out for Harambe.

In the northern islands just above Scotland proper sits Orkney, an archipelago with just over 20,000 people. Its library has gained great internet fame thanks to an online presence as quirky as it is informative.

Recently, its verified Twitter account sent out a beacon of distress about a book of lampshades. Turns out the light-diffusing tome had been lost (again). Wherever could it be?

While librarians go looking for the book, one key fact came to light from Bob Murphy: Somewhere out there in this world, a Harambe lampshade exists.

Does the book have this gem in it? #ShadesOutForHarambe pic.twitter.com/FSbYNpTXgk

It only makes sense that the ape who died would bring light to our lives. A bit of searching brought me to Debenhams, a British retailer whose Edition line includes an Abigail Ahern-crafted orange felt gorilla lamp.

“Designed with a gorilla base in orange felt, it includes a matching shade with vintage-inspired pleats on the trim and an easy flip switch,” its product listing proclaims. Sure, it doesn’t explicitly name Harambe, but who else do you think this warm and welcoming silverback gorilla was inspired by?

If you feel like honoring Harambe with a splash of color, the lamp is available for around $115. As of this writing, Orkney Library is still searching for its lampshade book, with an added assist from Brantford Library.

Could this be security camera footage of the raid? ;) pic.twitter.com/BSB5GrmCB8

At least we know Harambe went into the light and that he’s in heaven. Rest in power.