And Harambetta if it's a girl.

Little did we know that the late gorilla would posthumously become one of the internet’s biggest influencers, inspiring a plethora of tasteless memes and dark jokes. The conversation quickly turned from discussing who was at fault for the animal’s death to memorializing him with slogans like “dicks out for Harambe.“

And now one teenager is hoping that the great ape is honored in the form of a baby gorilla at the Dublin Zoo.

Dublin Zoo is delighted to announce the arrival of a baby western lowland gorilla! https://t.co/yTMs0PDJ9R pic.twitter.com/Hr15W1657j

Victor Branagan started a Change.org petition asking that the zoo honor Harambe by naming a gorilla born earlier in July “harambe Jr,” or “harambetta” if it’s a girl. The children are the future, right?

Branagan wrote in the petition description, “Dublin zoo have recently gained an additional member to their gorilla squad. At the time of writing this the baby is nameless and its gender hasn’t been confirmed by its keepers.” 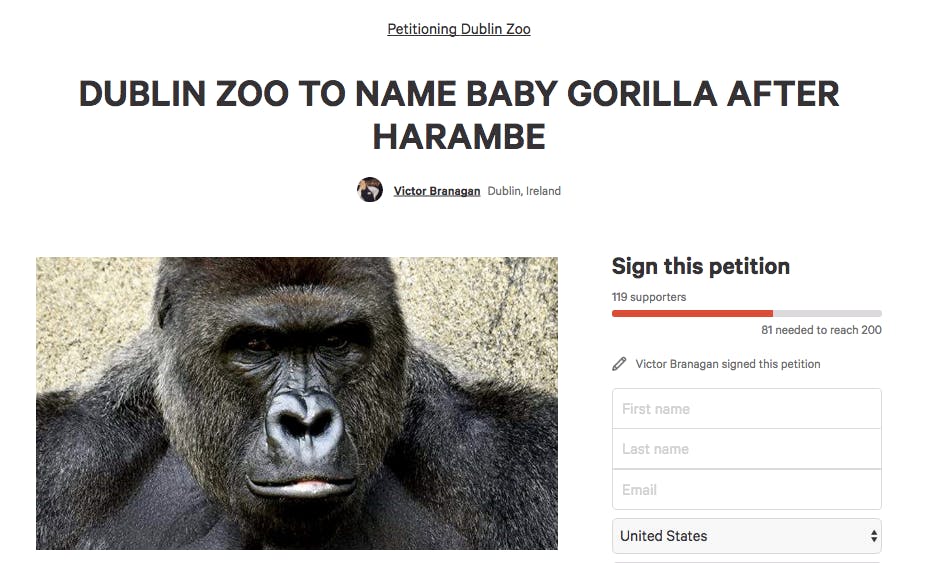 The Daily Dot caught up with the 17-year-old petitioner over email. We asked him about his own love for the gorilla, Harambe’s connection with Hillary Clinton, and more.

Tell me a little bit about your personal connection with Harambe. Why are you so fond of this gorilla? What about him has you so inspired?

For years the awesome power of the mighty gorilla has amazed myself and others around me. I can’t tell you how many times I’ve searched “gorillas fighting” on YouTube and each time I was astonished by the true king of the jungle. To me Harambe is more then just an earthly being. He is the second coming of Christ. What inspires me about Harambe is how something that can’t speak can say so much. A martyr.

How did you grieve losing Harambe?

After the death of harambe my life was thrust into a Tarzan-like state. I became feral due to the grief. I began watching any movie with gorillas in it, King Kong, Tarzan etc., but it wasn’t until I began watching planet of the apes I realized there needed to be a change, not to grieve Harambe but to avenge him. I also found that the resemblance between Caesar and harambe was uncanny. Both assuming roles of leadership even if Harambe’s was in death.

What do you think of the internet’s love of Harambe—remembering him in memes and suggesting that he possibly had something to do with 9/11?

I think that the internet is using the memes to cope with the loss of someone they look up to and also to raise awareness of the injustice that occurred on May 27th 2016. We all know Hillary knew about Harambe’s extensive knowledge of what really happened on September 11th. How could a four year old climb into the gorilla inclosure without a helping hand. They can deny involvement all they want but the numbers add up.

If the Dublin Zoo doesn’t name the gorilla Harambe Jr. or Harambetta, what are some other excusable names?

Dublin Zoo must name the baby gorilla after Harambe. Why wouldn’t they? It just wouldn’t make sense. They’re  pretty chill anyway even after I constantly spammed them. So I’d be extremely disappointed if they didn’t. Like Harambe Jr. and Harambetta!, I envy the animal that gets graced with those godly names.

What do you think of the turnout so far for your petition?

I haven’t been able to share the petition as much as I could due to terrible internet connection and sleeping all day but 100 signatures in just two days is pretty good to me.

Anything else you want to add that I didn’t ask about?

I would also like to add that Cecil the lion is no match against harambe. The brute force and aggression of Garambe would quickly overwhelm the lion with ease.

You can sign the petition here, and if you really want to go above and beyond, sign this other petition demanding that May 28 become “International Harambe Day,” or “Harambday.” Justice (and dicks out) for Harambe.