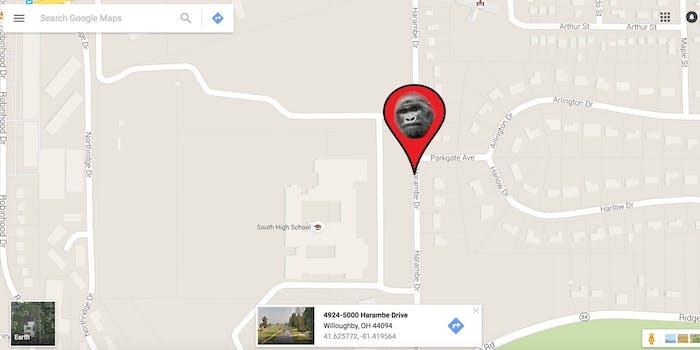 It's driven me before and it seems to have a vague Harambe mass appeal.

261 miles from the Cincinnati Zoo sits the lakeside town of Willoughby, Ohio—aka the Courtesy City. Willoughby certainly bolstered that nickname thanks to a grassroots effort to slyly rename one of its streets Harambe Dr.

WE SENT COMPLAINTS TO GOOGLE MAPS SAYING SHANKLAND ROAD WAS ACTUALLY HARAMBE DRIVE AND THEY CHANGED IT IM SCREAMING pic.twitter.com/b7SvgDzx2K

Chris Gallagher and a team of Harambe advocates took to Google Maps for some guerrilla activism, prompting the company to change the Willoughby road’s name on Friday. It’s been two days and unsuspecting citizens are still driving down Harambe.

This moving tribute to the slain gorilla, who was killed at the Cincinnati Zoo following a child entering its enclosure, has seen support from Harambe activists of all stripes. Dicks out for Harambe, which held an evocative demonstration last weekend in front of the White House, was quick to voice its approval.

Got my dick out rn for Harambe

Those looking to take their tribute IRL have been clamoring for a slogan to show the city of Willoughby when the time comes to take their plan offline and make it official. After all, Dicks out for Harambe would be nothing without its “dicks out” catchphrase. What could Harambe Dr. activists use to broaden awareness for their cause?

@Southern_Philly 🎶Life is Harambe. I wanna drive it all night long🎶