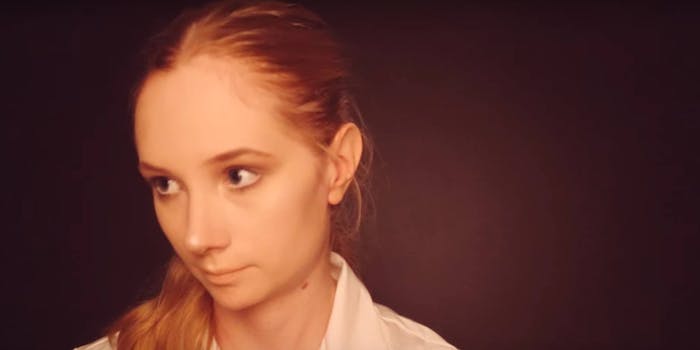 You know, Harambe probably wouldn’t like this ASMR video about him

Do gorillas even get ASMR?

Autonomous Sensory Meridian Response is a phenomenon meant to induce a tingling, pleasant sensation when listeners hear such sounds as whispers and paper crinkling. Few academic papers and research studies exist about ASMR, though thousands of YouTube videos certainly do. One of the latest happens to involve everyone’s favorite silverback gorilla, Harambe.

“🐵 ASMR Saving Harambe 🐵 Emergency Medical Attention” is exactly what you think it is: a video featuring YouTube star Bluewhisper administering an injection of soothing sweet vocals while trying to save Harambe.

And she does! Through a time-stamped log of emergency care, Bluewhisper and a team of nonexistent medical assistants administer anesthetics, shave around and clean bullet wounds, remove shrapnel, and stitch Harambe up as if the whole incident involving a child entering his enclosure never happened.

Bluewhisper pets at the camera and soothes her gorilla patient. “Alright, Harambe, I’ll be checking on you soon,” she whispers as the video ends.

Viewers are loving the personal attention—yet another detail that taps into the appeal of ASMR. But what if Harambe were still alive and indeed being so dutifully attended to? How would an actual silverback gorilla feel about being whispered at?

You know what? He probably wouldn’t get it. Those same whispers that sound chill to us are a completely unfamiliar noise to silverback gorillas. Harambe would probably lose his shit thinking some predator was low-key spying on his ass—and in his most vulnerable, injured moment—as he tried to determine just who was whispering his name over and over.

According to researchers at the Wellcome Trust Sanger Institute, silverback gorillas are challenging our notion about the way hearing evolves. The apes, whose ears are similar to our own, may very well rival humans in terms of hearing acuteness. That doesn’t necessarily mean that Harambe would totally get the tingles or decide that his favorite song is “The Whisper Song.”

Besides, Harambe’s more of a Frank Ocean guy.