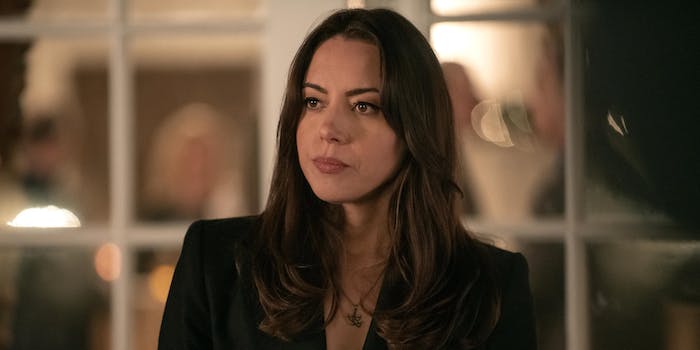 A lot of viewers just weren't into the main couple.

Hulu‘s lesbian romcom Happiest Season is getting pretty good reviews, but one crucial detail seems to have backfired. A lot of viewers wish that the protagonist Abby (Kristen Stewart) had broken up with her girlfriend and gotten together with someone else instead. Namely her new friend Riley, played by Aubrey Plaza.

Riley is the ex-girlfriend of Abby’s current partner Harper, played by Mackenzie Davis. And let’s just say that Harper doesn’t come across very well in the movie. She and Abby are introduced as a happy, loving couple, but Harper is still in the closet, leading to some majorly stressful situations when they travel to Harper’s family home for the holidays. Things already start off on the wrong foot, because Harper failed to inform Abby that she hasn’t come out to her parents. She springs this news on her girlfriend in the car!

Happiest Season mixes classic Christmas romcom tropes with social commentary about life in the closet, and some people found it hard to root for Harper’s perspective. She basically strings Abby along, forcing her to hide their relationship. Also (and this is a spoiler!), we discover that Harper did the same thing to her ex-girlfriend Riley when they were together. In fact, she dropped Riley like a hot potato when some other kids at their high school realized that Riley was gay. Abby and Riley bond over their shared experience of falling in love with a closeted lesbian, leading to an uplifting sequence where Riley takes Abby to a gay bar—a breath of fresh air compared to Harper’s picture-perfect family, and the boring sports bar where Harper hangs out with her straight friends. By the end of the movie, many viewers wanted Abby to get together with Riley instead.

Plus, Aubrey Plaza looks amazing in this movie, sporting a series of casual, tailored suits. Happiest Season makes a lot of smart costuming choices across the board, with Harper’s conservative family failing to pick up on the subtext of Abby’s soft-butch fashion sense.

Basically, Happiest Season messed up on two fronts: it made Riley too hot, and it failed to illustrate why Harper was (allegedly) such a great girlfriend to begin with. Abby is a very sympathetic protagonist, but while Harper has understandable motives for staying in the closet, she just isn’t as appealing as the cool, emotionally intuitive Riley.