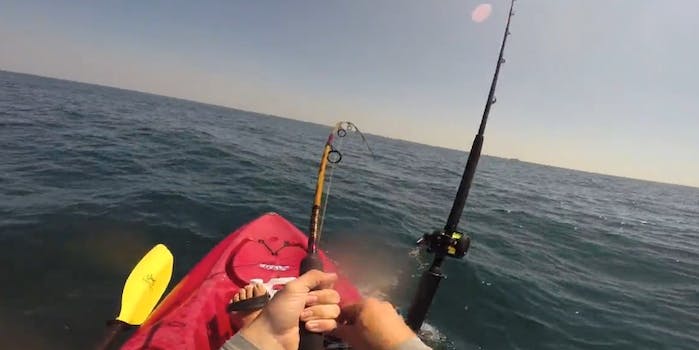 Kayaker holds on for dear life after catching hammerhead shark

Just another wild day in the Sunshine State.

Somewhere off the coast of Florida a kayaker named Adam Fisk is saying he locked hooks with a hammerhead shark and let it take him for a two-hour ride that washed him ashore two towns away.

Sounds like a Disney move, right? Wrong! This is #Florida, brother. This is just another day in the Sunshine State.

Footage shows Fisk actually attracted the attention of two hammerheads during this two-hour journey, which he filmed for a five intermittent minutes from his one-man kayak.

“Shark turned out be about 11 feet,” he wrote. “It charged me a few times when I had the camera off and I did not have the camera close to me. I was a bit wary of filming while it charged, as I was all alone with no one to help if anything went wrong.”

Quote the top commenter: “Are you f***ing nuts?”