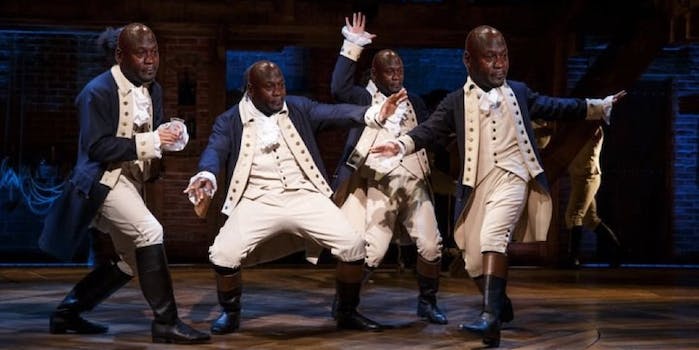 Broadway musicals are no joke.

Lawyers for Lin-Manuel Miranda’s Hamilton have cracked down on a fun prank website that tricked fans into thinking they’d won cheap tickets to the popular Broadway show. When it comes to very serious matters like a rap musical about the father of America’s national bank, one cannot be too legally careful. It is not a matter for jokes.

Hamilton, the it musical of the past few months, is either the second coming of Jesus Christ himself or a warmed-over Lupe-Fiasco-and-history-book casserole, depending on who you ask. Regardless of its merits, though, it is the hottest ticket in the great city of New York. To see Hamilton is very expensive, if you can get tickets at all, so many fans have turned to a lottery that offers $10 seats to the winners.

Into this tragic tale of ticket scarcity stepped a brilliant troll, Scott Luptowsky, and his website Hamiltowned.com. The site let users prank their friends with a convincing-looking email promising they’d won the Hamilton lottery. But when the suckers clicked through, they were met with Crying Jordan, the icon of failure and sadness.

This joke did not please the legal team that represents Hamilton. BuzzFeed reports that the Hamilton Uptown Limited Liability Company sent Luptowsky a cease and desist notice not long after Hamiltowned went up.

Because one does not want Hamilton as an enemy, Luptowsky complied. Hamiltowned.com has, itself, been Hamiltowned. It now redirects to Luptowsky’s personal site, where you can see the other gifts he’s given the internet, including Nicolas Cage Roulette, an app that randomly streams Nicolas Cage movies on Netflix.

You win this round, musical theater nerds.