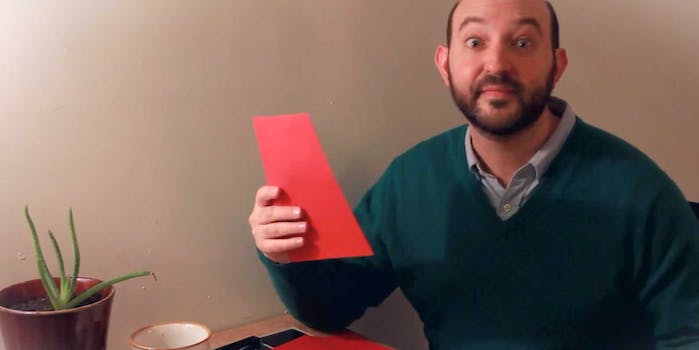 These politically correct holiday cards ought to save you some grief

We desperately wish these actually existed.

As we roll into Christmas, a lot of us will be gathering with relatives and settling down for a lengthy political argument we’d really rather not have. Something about the occasion gets people touchy about their beliefs—or annoyed that other people are so touchy. Perhaps you even know a uncle who reads the Drudge Report and therefore thinks that saying “happy holidays” instead of “Merry Christmas” is “political correctness gone mad.”

If you’d like to show him how much worse things could be, look no further than this marvelously deadpan sketch from the good folks at PITtv, the video arm of the People’s Improv Theater in New York. “Politically Correct Hallmark Cards” has exactly the soft glow and Christmas trimmings of a late December night on the home shopping network, but the products themselves are resolutely irreligious, lest anyone be offended.

The first cards bear your standard generic salutations, “Season’s Greetings” and the like, but as soon as we get to “Enjoy Your Non-Denominational Vacation Day or Days!” it’s clear we’re in the hands of masterfully evasive copywriters. I won’t spoil how they’ve edited the phrase “don we now our gay apparel,” but rest assured I would purchase the result were it real. There’s even a card, at long last, for bitter atheists! This must be what secular humanist paradise is like.