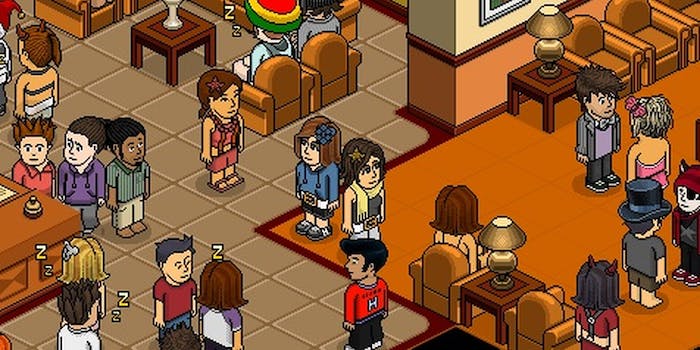 Habbo’s hotel has a pedophile problem

Teen-oriented social networking site Habbo has become a destination for pedophiles looking to groom child victims, according to an exposé from the U.K.'s Channel 4.

An investigation by the U.K.’s Channel 4 revealed a high volume of sexually charged conversations on Habbo, some of which have led to pedophiles being convicted for sexually abusing children.

A producer working for the channel posed as a young girl on the site for two months.

“The chat was very sexual, perverse, violent, pornographic, overtly sexual acts, people saying they were going to do things to others, and it was very graphic,” said Rachel Seifert.

Within two minutes of logging into the site, she was asked if she’d go on webcam, and if she’d be open to chatting on instant messenger services. Additionally, others asked if she’d strip naked and what she’d be willing to do while broadcasting from her webcam.

There’s no doubt that Habbo, which has been around for over a decade, certainly skews younger than most Web communities. The colorful cartoon aesthetic lends itself to a younger audience. Indeed, Channel 4 claims kids as young as nine are using the Habbo frequently, even though the site is meant for teens.

A pedophile named Matthew Leonard was recently jailed for seven years after befriending kids on Habbo and persuading them to strip on webcams. He also blackmailed young girls into committing other sexual acts on webcam, convincing them to speak with him away from Habbo in exchange for virtual goods that normally cost Habbo users money. Police traced more than 80 victims, all of whom were originally contacted on Habbo.

The site is also a haven for teens looking to engage in sex chat, though teens have engaged in cybersex as long as chat rooms have been around.

Habbo owner Sulake claims the site has 268 million registered users, with 9 million unique visitors per month. In the wake of Channel 4’s investigation (set to air on the outlet’s evening news program Tuesday), investor Balderton Capital is returning its 13 percent stake in Sulake at zero value, according to The Kernel.

“I was sorry to hear of Balderton’s decision to withdraw its involvement, but my priority right now is to address the issues raised by the investigation,” Sulake CEO Paul LaFontaine wrote in the comments section of The Kernel’s report. “Since hearing about the report I have asked my team to tighten security across the site and to strengthen the user rules.”

LaFontaine also published a blog post Tuesday, in which he stated that more than 225 moderators track around “70 million lines of conversation” daily. Given the use of alternative spellings and euphemisms, it’s admittedly difficult to catch all the sexual content on any Web communities using automatic filters.

Habbo sent a message to users Tuesday saying it doesn’t “promote or allow explicitly sexual content,” and cybersex and requests to go on webcam are also prohibited. However, the Channel 4 exposé suggests that Sulake could be doing much more to combat the way in which predators are targeting children on the site.