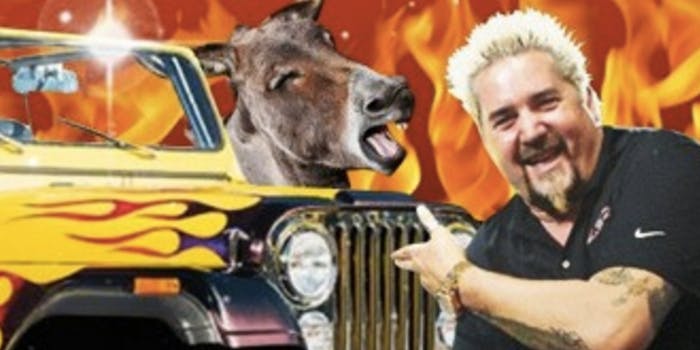 This is gonna give you heartburn.

Culinary superstar Guy Fieri is known for his frosted tips, using adjectives like “blasted” in his restaurant menus, and signing Lean Cuisines for his adoring fans. Could a rap career possibly be far behind?

Not according to the Internet. Following rampant speculation on a single niche subreddit, pop-culture foodie blog First We Feast on Tuesday cheekily claimed that the debut single from Fieri’s first mixtape, The Mayor of Flavortown, has been “leaked” by an anonymous source.

Like Billboard, we 100 percent doubt the authenticity of this twangy jam, but the commitment to a dirty southern hip-hop track dissing Anthony Bourdain is commendable no matter who wrote or recorded this willful monstrosity.

If “Donkey Sauce” is just the teaser from an actual, existing Fieri concept album, I’ll take my copy with a side of humble-blasted pie.