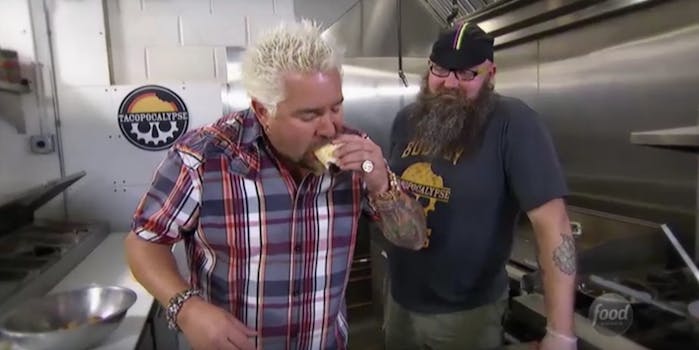 'I will let you down, I will make you hurt.'

Looks like even the Mayor of Flavortown can’t escape humankind’s tendency to inflict pain upon itself.

Creative genius Mayor Wertz has cooked up this amazing video of Diners, Drive-Ins and Drives icon Guy Fieri chowing down to Johnny Cash’s cover of “Hurt.” Watch as Cash’s sultry voice and the melancholy lyrics of the song wash over you as the bleach-blonde restaurateur stuffs his mouth with cheeseburgers, burritos, and more.

There’s just something so powerful hearing Cash croon, “I will let you down, I will make you hurt” as Fieri gorges himself. Like, some sort of anguish in his eyes is completely revealed as he comes to grips with all the suffering that he has brought to his audience.

Because we all know how much Fieri’s catchphrases have hurt us.