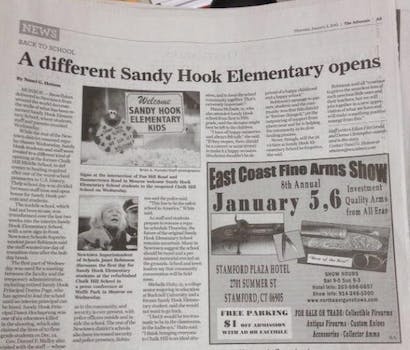 Dotted Lines: The worst possible place for a gun ad

Not sure if there were desk lamps (or telephones) in Napoleon’s time, but the point is, he’s a sucker.

• There’s only one guide you need to Fred Armisen and Carrie Brownstein’s hilarious Portlandia, and that’s this comprehensive collection of every famous guest star in season 3.

• Awful, unfortunate, no-good juxtaposition of the day: this newspaper placed an ad for a gun show next to an article about children returning to Sandy Hook Elementary.

• Legend of Zelda animated videos are usually pretty bad, but this fan-made clip is an exception.

• Why are the Lakers losing? If you ask Kobe Bryant, it’s because “we’re old as shit.” Here’s a roundup of #24’s other famous tirades.

• Any decent list of the 25 most awesome saxophone songs of all time better have a Fuddruckers-sized portion of Clarence Clemons in it.

• The barftastic concept of the “friend zone”—i.e., blaming women when you’re too scared to ask them out—is all over the Internet, from ragetoons to Westeros. Dan Solomon at The Frisky offers guys a helpful guide to the phenomenon. Now can we talk about something else?

Photo by @BekimUkperaj via HyperVocal