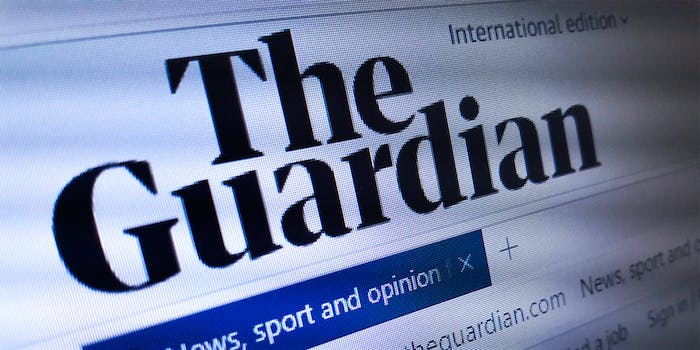 ‘This is astonishing’: The Guardian removed a TERF-critical passage from an article

The deleted section is now being shared via screengrabs.

Only hours after publication, the Guardian removed a significant portion of its interview with Judith Butler, gender theorist and author of the seminal work Gender Trouble: Feminism and the Subversion of Identity, in which Butler discussed the alarming collaboration between trans exclusionary radical feminists (TERFs) and fascists.

In the now-deleted section, Butler spoke about how “appalling and sometimes quite frightening” it is to see TERFs allying themselves with religious extremists and the far-right while campaigning against the rights of transgender people. Having earlier stated that the “anti-gender ideological movement,” adhered to by both the right and self-proclaimed anti-trans feminists, is “is at once anti-feminist, homophobic and transphobic, opposing both reproductive freedom and trans rights… And to reverse major legal and legislative successes for sexual freedom, gender equality and laws against gender discrimination and sexual violence,” something the Guardian chose not to edit out, Butler went on to say in the now-deleted section:

“The Terfs (trans exclusionary radical feminists) and the so-called gender critical writers have also rejected the important work in feminist philosophy of science showing how culture and nature interact (such as Karen Barad, Donna Haraway, EM Hammonds or Anne Fausto-Sterling) in favor of a regressive and spurious form of biological essentialism. So they will not be part of the coalition that seeks to fight the anti-gender movement. The anti-gender ideology is one of the dominant strains of fascism in our times. So the Terfs will not be part of the contemporary struggle against fascism, one that requires a coalition guided by struggles against racism, nationalism, xenophobia and carceral violence, one that is mindful of the high rates of femicide throughout the world, which include high rates of attacks on trans and genderqueer people.”

The only explanation offered for its removal was an editorial note at the bottom of the article, stating “This article was edited on 7 September 2021 to reflect developments which occurred after the interview took place.”

Speaking to Vice, Jules Gleeson, who conducted and wrote up the interview, said that The Guardian made the edits based on a swift negative social media response to the article as well as messages sent to “the reader complaints department.” Those complaints focused around Gleeson’s reference of the Wi Spa incident in the question Butler was responding to.

The Guardian confirmed this in a statement to the Daily Dot. “On 7 September 2021, the Guardian edited a Q&A with Judith Butler as one question, posed by the Guardian, failed to take account of new facts regarding the incident at Wi Spa, which emerged late last week after the interview took place and the piece was written,” the publication stated. “In light of those developments, the question regarding Wi Spa in the interview should have been reviewed again prior to publication, but this did not happen. This is a departure from our usual editorial standards.”

However, while Gleeson admits the news about the Wi Spa case does make it an unhelpful example to use in her question, it was just that, a question, and one she offered to rewrite for them free of charge in order to retain Butler’s response as there are many more still pertinent examples she could use. However, the Guardian failed to take her up on, and, though they have allegedly apologized to Gleeson, the section continues to be excluded from the published piece.

Though not technically censorship (something which requires the intervention of an external authority to qualify), this variety of post-facto editing is generally considered poor practice, and even poor journalistic ethics. However, the Guardian‘s statement maintains that in doing so they actually repaired a slip in editorial standards.

“We have not censored Judith Butler but addressed a failure in our editorial standards,” it wrote. “This particular question omitted the new details that had come to light, and therefore risked misleading our readers. For that reason we decided to remove both the question and Judith Butler’s answer. As it was only this one question that referred to the Wi Spa incident in LA, the rest of the Q+A remains in place. Judith Butler has written for us several times in the past.”

Other journalists and editors do not agree.

Many have speculated that the reason for this edit is the anti-trans stance prevalent in the U.K. media, and the U.K. Guardian specifically, as while the article was published in the Guardian‘s U.S. vertical, the Guardian is a U.K.-based publication.

Some people called out the U.K. Guardian and its columnists specifically for its history of supporting and publishing anti-trans articles and pieces supporting TERFs and the “gender critical movement.”

However, in a touch of irony, the Guardian‘s erasure of this segment of the article appears to have invoked the Streisand effect, with more people having seen the archived version and screenshots than the original version of the article.

As always, at least with the internet, trying to remove something just drew more attention to it.

Update Sept. 8, 5:25pm CT: In an email to the Daily Dot, Gleeson confirmed that she offered to revise the question. “Unfortunately, the Guardian editors decided to go ahead with their decision to censor Judith Butler,” she said.

“I can only hope that the overall point Judith Butler was making can receive some wider circulation, in light of this controversy,” she continued. “The Heritage Foundation and Proud Boys (and those who collaborate with them) are threats to us that deserve more than online intrigue and editorial backpedalling.”