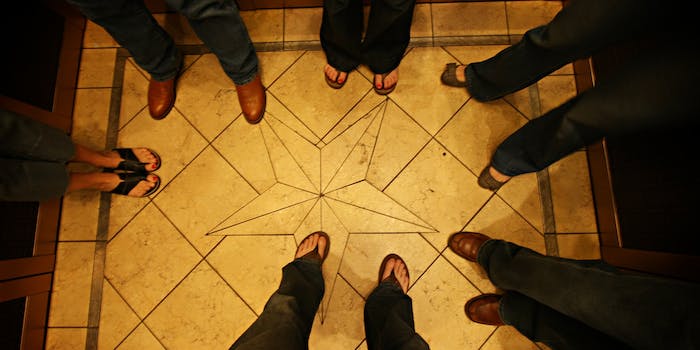 Once again proving the old adage about what goes up.

The man behind the popular parody Twitter account @GSElevator, which entertained an audience of more than 600,000 followers and tweeted out the equally hilarious and horrifying private musings and comments of bankers, has finally been exposed, according to a new report from Dealbook’s Andrew Sorkin.

He’s John Lefevre, a 34-year-old former bond executive from Texas, and while he never actually worked at Goldman Sachs, his many tweets demonstrating the elitism of Wall Street resonated and struck a nerve with many of its followers.

[Classic] #1: When it doesn’t matter how much the drinks cost, it’s always Happy Hour.

#1: The NSA is the only branch of the government that actually listens to people.

#1: My 1st wife was vehemently pro-life until my girlfriend got pregnant. #2013Faves

It led to Goldman Sachs launching an internal investigation to find the culprit behind @GSElevator, which came up empty.

Lefevre even sold a book proposal about Wall Street culture based on his Twitter account last month and figured that the day when he was exposed would come eventually.

Lefevre, who worked at Citigroup for seven years, said that he initially started the Twitter account as “a joke to entertain myself,” and asserted that many of the stories he tweeted out were true, although they may not have taken place at Goldman Sachs. He chose Goldman Sachs as the name for its commercial appeal and even admitted to pandering for retweets over time.

“I do not have an agenda to paint the people or this culture one way or the other,” Lefevre, who called himself a “cynical banker,” told Dealbook. “I loved it. We did a lot of crazy stuff. It’s not like I had a great epiphany along the way.”

The biggest shock to Wall Street is that Lefevre never actually worked at Goldman Sachs, which may say something about what’s actually said on Wall Street elevators.

It really took “several weeks of reporting” to figure out @GSElevator is run by someone who doesn’t work at Goldman? https://t.co/Zqwq1mTJEy

A Goldman Sachs representative, upon being told that @GSElevator had been revealed, said in a statement, “We are pleased to report that the official ban on talking in elevators will be lifted effective immediately.”

You can read the full report at Dealbook.