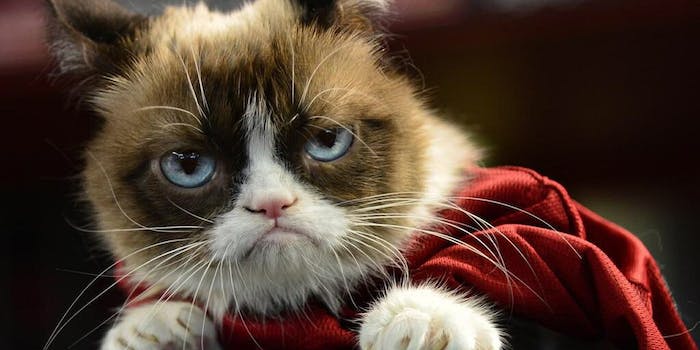 You can imagine how happy she was. Actually, you don't have to imagine: you can see it on her face.

Grumpy Cat had the honor of “throwing” out the first pitch at Monday’s Arizona Diamondbacks game, but of course, that didn’t mean she was happy about it.

With her owner Tabatha Bundesen by her side, Grumpy (real name Tardar Sauce) donned a Diamondbacks shirt for the occasion and got to work. She touched the ball, which is now an even greater ball because of it, but ultimately let her owner throw it instead—not only can she not physically throw it due to her paws, but doing something like that would be far beneath her.

Grumpy Cat, who was last seen not caring about getting a wax statue at Madame Tussauds, spent much of her day gracing the team and its mascot with her presence. She may have their game.

Speaking of Grumpy Cat, @DbacksBaxter meets his (very) distant relative but has no luck at cheering her up. pic.twitter.com/rRH9zi8RIH

Apparently, even a big win over a division rival isn't enough to make @RealGrumpyCat smile. pic.twitter.com/YfSLMUmMjk

We can only hope that Grumpy Cat was paid tremendously in kibble and cat treats for her latest public appearance. But most importantly, we hope she was rewarded with a nice long nap.