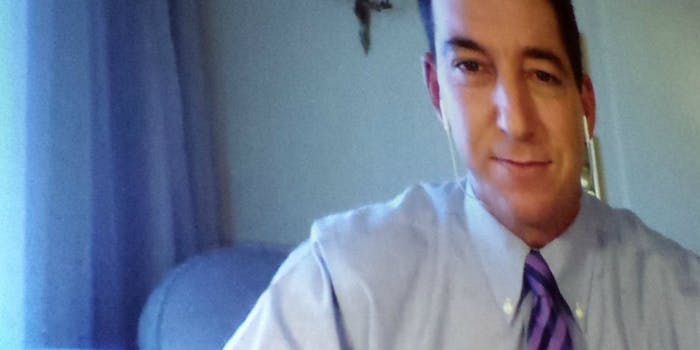 Speaking before a packed ballroom at the South by Southwest festival, journalist Glenn Greenwald spoke at length about his ongoing U.S. intelligence reports, the persecution of journalists, the status of his recently formed media company, and the consequences of his partnership with U.S. whistleblower Edward Snowden.

Like WikiLeaks founder Julian Assange and Snowden, Greenwald was not present at SXSW, but delivered his talk via livestream.

The talk began with a joke involving farm animals and the Director of National Intelligence, which was one of the top-voted interview questions online: “Would you rather fight 100 duck-sized James Clappers or one horse-sized James Clapper?” Greenwald replied, “I love Reddit.”

When asked if he’d watched Snowden’s talk, which took place four hours earlier, Greenwald said he had. “Including the part where he very generously held me up as the face of journalistic ineptitude, when it comes to technological challenges,” referencing Snowden’s first attempts to contact Greenwald, which failed because he struggled with installing the required encryption tools. Snowden joked that the tech community needed to create new encryption tools for journalists that could pass the “Glenn Greenwald test.”

With regards to encryption, Greenwald was asked how hard it is for journalists to become a safe conduit for sensitive sources to interact with. “I definitely operate encryption tools to a pretty advanced degree,” he said. “I think the barrier people have to using encryption is more psychological than anything else.” Greenwald said he perceived encryption to first be incredibly complex, but in retrospect has found mastering the tools needed to secure his communications to be fairly simple.

Greenwald called the attempts at legislative changes to the National Security Agency’s operations important, but largely symbolic. “In theory, it’s the role of Congress, first and foremost, to exercise oversight and impose restraint on this out of control behemoth that has become the surveillance and national security state,” he said. “In practice, however, none of that is going to happen. None of that is realistic.”

“The national security state in Washington has so completely perfected the art of co-opting and capturing whatever safeguards are created that they are very adept at instantly turning them into further tools for their own power, rather than what they’re intended to be,” Greenwald said, providing the congressional intelligence committees as an example of how oversight can be corrupted, eventually enabling the unconstitutional practices it is supposed to police.

On the topic of privacy, Greenwald told the audience, “In a healthy democracy, the presumption is that everything that those in public office, who wield public power, do, ought to be transparent… for private individuals, everything that we do, ought to be kept private.” The roles of private and public individuals, in terms of privacy, have been radically reversed, Greenwald added.

Greenwald also spoke about First Look Media, his recently formed news company, funded by eBay founder Pierre Omidyar. He said that the Snowden documents would continue to be shared with other media outlets, a system he lauded WikiLeaks for pioneering. He also said that on the following day, his company would announce the hiring of two additional journalists, which he said would also help add diversity to their staff. Mocking some of his critics, he joked about the Intercept website, which was only temporarily established to provide a forum for reporting on top-secret documents, calling it a “$250 million WordPress blog.”

At present, the former Guardian columnist remains in Brazil with his partner, David, in a kind of self-imposed exile. It’s unknown what actions, if any, the U.S. government might take should Greenwald reenter the United States. He has repeatedly stated that he plans to return in the near future.

Asked if he believed the Internet was still a force for democratization, or if it had become, instead, a force for control, Greenwald told the audience, “That, to me, is the critical question. It’s the question that I think lies at the heart of what the debate over mass surveillance is about. I think that the Internet, like most technologies that have ever created, can be a force either for great good or for great evil.”