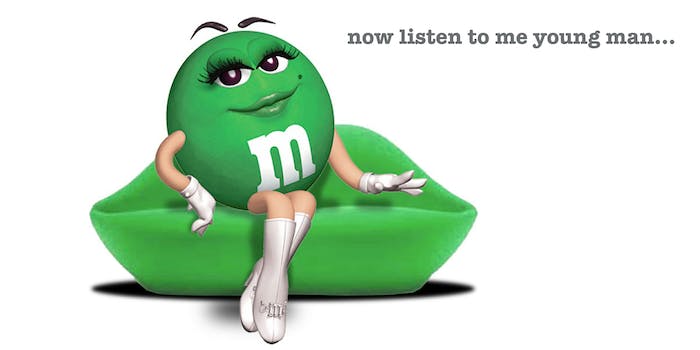 The green M&M wants you to do her a favor

It involves a fake PS2 game and David Lynch.

This is not going to make any sense at first, but listen to me: there’s a wild Tumblr meme in which the female green M&M from the candy’s advertising campaign really wants a copy of the game Bambi for the PlayStation 2. And if you don’t get it for her, you’re going to pay the price.

It all started around nine months ago with an exchange on Tumblr, where a poster with the username relishboi was roleplaying as the M&M mascot Ms. Green. She asked another poster, brownreasontolive, to come sit down next to her, and then she said this:

now listen to me young man, i am talking directly into your ear now. i need you to do me a favor. you will do this for me. i need you to go to gamestop, and i need you to ask the bastard working the counter if they have bambi on the ps2. if you come back empty handed youll be in big trouble mister. you will never see the light of day.

This post established all the key points of the Ms. Green character and the related meme: Ms. Green is a dominating personality who always gets what she wants. And what she wants is Bambi for the PlayStation 2.

Tumblr loved it. The original relishboi post now has more than 100,000 notes, and the “listen to me young man” speech is a popular copypasta—a long chunk of text that people copy and paste on social sites for comedy purposes.

Now the M&M mascot is back in a big way on both Twitter and Tumblr. Perhaps inspired by Ms. Green’s appearance on Valentine’s Day M&M packaging, posters are memeing her with fanart and new jokes. The meme version of the character is much richer and more interesting than the official version.

There’s one more twist that makes this meme extra good, though: Bambi for PlayStation 2 doesn’t even appear to be a real game. Best I can tell, it’s a bit of absurdist humor based on this 2001 PS2 commercial by surrealist master David Lynch, which happens to be titled “Bambi.”

So now we’ve got a candy domme, a PlayStation game that never existed, that bastard at GameStop, and David Lynch. That’s some impressive worldbuilding for a Tumblr post, and it explains why the meme still resonates after nearly a year.

Even without the Green M&M, the “now listen to me young man” copypasta has taken on a life of its own.

But nothing will ever top the original. You’ll never see that green M&M the same way again.