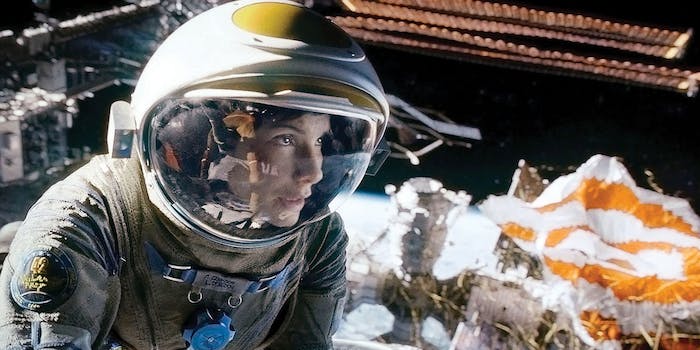 If ‘Gravity’ wins the Oscars’ Best Picture, it’s for the wrong reasons

Gravity could win Best Picture on Oscar night, but for all the wrong reasons.

It seems like everyone in the known universe thinks 12 Years a Slave is going to win the Oscar for Best Picture this weekend. On Gold Derby, the most comprehensive aggregate of Oscarologist opinion on the Web, 12 Years a Slave is way out in front—with 23 Oscarexperts betting on it to win, compared to just seven for Gravity. The Steve McQueen-directed film has held onto the presumptive frontrunner slot for most of the race, after Vulture’s Kyle Buchanan declared it the proverbial “One to Beat” after seeing it at the Toronto Film Festival, where it won the fest’s coveted audience award.

Most early frontrunners fade out, like Up in the Air and Silver Linings Playbook, festival favorites that didn’t translate into Best Picture wins. Not 12 Years a Slave, which has such an air of inevitability behind it that Entertainment Weekly’s Anthony Breznican warns that might spell trouble.

“When I talked to Academy voters this week, I found many who assumed 12 Years a Slave would win, even though they and others they knew were voting for Gravity. I only occasionally hit a 12 Years voter—which surprised me,” Breznican wrote. “My gut tells me 12 Years will win—it is emotionally powerful, and focuses on a meaningful chapter of history in an uncompromising way, renewing interest in an American hero who had been lost for ages to everyone except academics. But what I’m hearing from anecdotal samples of voters—and picking the brains of strategists who do the same—suggests that the Academy has deep respect for 12 Years, but they love Gravity.”

Breznican’s findings came after split wins for Gravity and 12 Years a Slave at the BAFTAs and Producers Guild Awards, where the two boasted the PGA’s first-ever tie. Because Gravity was technically a U.K. production, the BAFTAs gave Alfonso Cuaron’s much-lauded masterpiece honors for “Best British Film” to avoid a Sophie’s Choice; 12 Years a Slave was then awarded Best Picture.

However, the Oscars will have to finally choose between the two—as it’s already ruled out the possibility of another tie—and it might not be the one we want. I’m personally pulling for 12 Years a Slave, which I consider one of the best movies of this or any year, but even the people I know who liked Gravity better hope it doesn’t win—because it would win for all the wrong reasons.

Like Olympic figure skating competitions, the Oscars are a draconian process that no one seems to understand, featuring a labyrinthine preferential ballot system and a revamped nomination process that confusingly honors five to 10 picture nominees every year. In voting for the “Best Picture” in that category, common sense should dictate that the year’s best film would go home with the evening’s top honors.

This is almost never the case.

The Oscars run by their own logic, and the odds show that after honors at the Producers Guild and Directors’ Guild, Gravity is poised to win it all—if you listen to the numbers. In the last 65 years, the Directors Guild Awards have accurately predicted Best Picture all but 13 times. The DGA winner has gone onto Oscar glory in each of the past two years, since the Academy adopted the aforementioned preferential ballots.

Since 2012, the Oscars have awarded Best Picture to The Artist and Argo, both PGA and DGA victors—despite Argo’s director, Ben Affleck, getting snubbed by the Academy. What they had in common is that they were two well-liked crowd-pleasers that were neither the critical nor audience favorite. In 2011, The Tree of Life landed on more top 10 lists than any other film, but The Help proved the biggest box office smash in the category. 2012 saw Django Unchained and Lincoln rake in box office dollars and the surprise hit Zero Dark Thirty win critical favor, but the Oscars couldn’t give “the torture movie” Best Picture. So Argo, another financially successful movie about Middle East politics, won in Zero Dark Thirty‘s place.

The preferential ballot favors a consensus pick, the film that’s most likely too well-regarded among the largest number of people. It doesn’t measure passion but general favorability. This year, Gravity and 12 Years a Slave scored virtually identical reviews on Rotten Tomatoes and Metacritic, but Gravity had one thing 12 Years a Slave didn’t: box office. After exceeding expectations in its October debut, Gravity became a worldwide phenomenon, taking in a staggering $703 million (and counting) around the world.

In comparison, audiences have been notoriously reticent to sit through 12 Years a Slave, with the film earning less than $50 million domestically. Slumdog Millionaire, also a Fox Searchlight release and its year’s most buzzworthy indie film, raked in over $97 million before Oscar night. The difference is that, like Argo and Gravity, Slumdog was a feel-good movie, whereas a recent L.A. Times piece warns that even many in the Academy might not have watched the “unbearable” 12 Years a Slave. The Times’ Betsy Sharkey calls 12 Years “the most revered film in recent memory that so few have seen.”

Although Brokeback Mountain was a bigger hit than 12 Years a Slave, the film proved equally difficult for many in the Academy to swallow.

Along with Some Like It Hot star Tony Curtis, Oscar-winner Ernest Borgnine made waves when he claimed he was abstaining from the film because of its subject matter. Borgnine said of the critically beloved Ang Lee film, then branded the “Gay Cowboy Movie”: “If John Wayne were alive, he’d be rolling over in his grave.” Brokeback Mountain cleaned up the Oscar precursors, taking home nearly every award in sight. However, Crash won on Oscar night, a.k.a the movie where Sandra Bullock falls down the stairs to learn about racism. The Awl recently called it the “most loathsome” Best Picture winner ever.

Like Borgnine and Curtis, AMPAS voters are overwhelmingly old, straight, and white, which affects how they vote. As a graphic from Lee & Low Books shows, people of color make up just 6 percent of the Academy, a near whiteout that contributes to a system where just six Best Actor winners have been men of color. In the Oscars’ 85-year history, only one woman of color has ever won Best Actress: Halle Berry. In the Best Actor category, The Oscars are unlikely to buck that trend this year, as Matthew McConaughey is the overwhelming front-runner in the race. He’s the declared favorite of 29 of Gold Derby’s 30 Oscar experts, even though 12 Years’ Chiwetel Ejiofor won the lion’s share of precursors. As in the case of Crash, they tend to vote for what they like—regardless what anyone else thinks.

When Crash beat Brokeback Mountain, it nearly broke America’s Oscar parties. Entire rooms stunned to silence by the Academy’s inability to think with a social conscience and do what was right. What made the Crash fiasco so embarrassing is that its politics were so nakedly obvious, but a Gravity win wouldn’t just ruin your night. Today that backlash would break the Internet, the obsessive thinkpiece topic of every blogger who wants to show how horrifically misguided and insular the Academy is. The problem is that we already know that. Just ask Ang Lee.

If Gravity emerges victorious on Oscar night, it won’t be because the film is a mind-bending technological miracle, or because it’s the movie that got us to go to the theatres again, or because it’s a win for women. The Oscars aren’t about doing what’s right. It’s about giving old white people what they want.