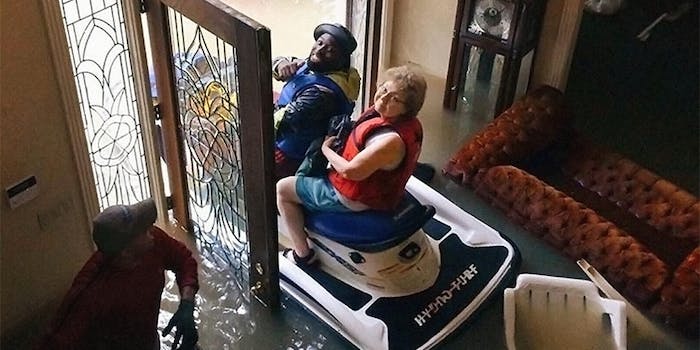 Grandmother in Texas rescued by hero on a jet ski

The ongoing disaster in Texas, like all disasters, has also spawned its share of heroes and inspirational stories.

Like this reporter who was able to flag down a passing sheriff’s car (which happened to be towing a boat) in time to save the life of a stranded truck driver.

Now a new hero has emerged. The best possible kind of hero: one on a jet ski.

Reddit user Webborwebbor posted this picture of his friend’s grandmother being rescued, and it’s one of the most heartwarming images to emerge following Hurricane Harvey.

Reddit commenter 1-800-CAT-LADY seemed to sum up what so many people in Texas are feeling.

“Houstonian here. I think at this point, a lot of us are tired of being sad and angry. Fuck it, rain won’t stop, but we got to move forward. And there’s something so amazing about seeing strangers and communities coming together to help one another. Through all of this shit, there are still things that can make you smile. Stay safe, y’all.”

If humans can just keep caring about other humans, we might just be OK after all.

Update 2:06pm, Aug. 31: ABC News has the scoop behind the photo. The woman and her husband, Karen and J.C. Spencer, called the local Chik-fil-A, where they are regulars, when their home began to fill with water on Monday. And that’s how they were rescued.

“We had to get out of there so I called Chick-fil-A, now that sounds kind of funny,” J.C. said during an interview on Good Morning America on Wednesday. “I ordered two grilled chicken burritos with extra egg and a boat. And can you believe that one of the managers of Chick-fil-A, she sent her husband to pick us up and we are so grateful.”

GMA also reunited the couple with the jet skiers who saved them, Keith Christensen and Winston Savice Jr. J.C. called them heroes and they hugged.

“No problem, someone had to do it,” Savice said. “I’m glad to see you guys are safe.”