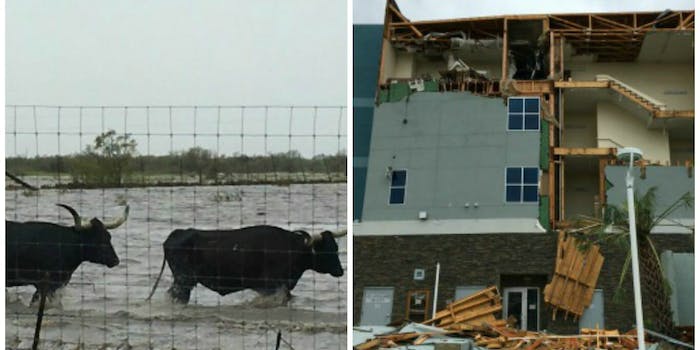 Hurricane Harvey was downgraded to a tropical storm on Saturday, but rain continues to pound south Texas. And the photos that have emerged from cities near the Gulf of Mexico coast, including Houston, are devastating.

Here’s what Rockport, which sits about 30 miles northeast of Corpus Christi, looked like on Friday night and Saturday.

Just got out of Rockport; no cell service there; catastrophic damage; homes, businesses destroyed. #hurricaneharvey pic.twitter.com/CJKPJOhEHZ

A rural area outside Rockport pic.twitter.com/CCYxVQarRk

It looks like a lake, but it's actually a rural field, a few miles outside Rockport pic.twitter.com/tJW2iaaK0Y

A boarded-up Rockport home: They saved their Hurricane Ike boards from 2008 pic.twitter.com/Q1FeHlt96o

Thus far, the National Weather Service is reporting that five people in Houston are dead, but that number is expected to rise.

Somewhere between five to 20 inches of rain fell over the Houston area overnight, and 15-25 inches more are expected during the next few days. Here are some photos from Houston.

Water coming into studio at #KHOU11… We are moving upstairs. pic.twitter.com/MMEljNatw7

#CNN now: People in Houston forced to leave their home after floodwaters rise overnight. "We busted down the door to use as a raft" pic.twitter.com/7PuiTSFGj0

30 miles outside of Houston pic.twitter.com/FIUbijqX7S

Houston's ANNUAL rainfall is 50". It's going to get that in a week. This will be catastrophic. https://t.co/3IInGhkQHf

Here's what I-610 looks like in Houston this morning. #Harvey pic.twitter.com/c8pwOJL01s

This could easily be one of the worst flooding disasters in U.S. History. The heavy rain will last thru much of the week #txwx #Harvey pic.twitter.com/kGWC8LL8aL

Meanwhile, here’s what President Donald Trump was tweeting about early Sunday morning, interspersing concern with people in Texas while promoting a book and bragging about his election.

A great book by a great guy, highly recommended! https://t.co/3jbDDN8YmJ

Great coordination between agencies at all levels of government. Continuing rains and flash floods are being dealt with. Thousands rescued.

Many people are now saying that this is the worst storm/hurricane they have ever seen. Good news is that we have great talent on the ground.

I will be going to Texas as soon as that trip can be made without causing disruption. The focus must be life and safety.

I will also be going to a wonderful state, Missouri, that I won by a lot in '16. Dem C.M. is opposed to big tax cuts. Republican will win S!

If you’re in danger in Houston, here’s what you should do.

WANT TO STRESS Persons should NOT go into their attics, but instead onto the roof, & if calling 911 stay on the line until it is answered!!