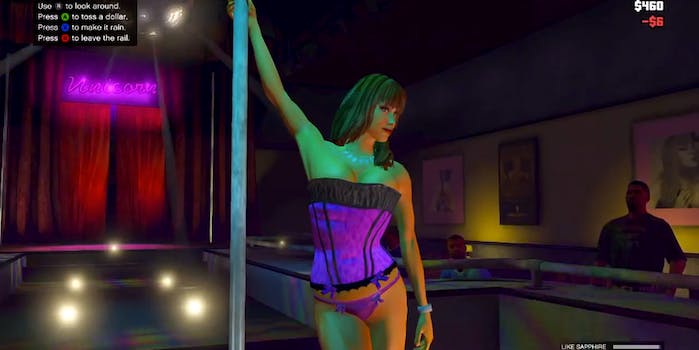 One Grand Theft Auto V player may have learned the hard way why you should always set your voice chat to private: an awkward flirting session with a CGI stripper ended up on YouTube.

In the game, you can bring a stripper home by flirting with her during a private dance. In online mode, that’s achieved by talking to her through your microphone. Like much of the game, all you really have to do is make noise, but sometimes players actually try to flirt with them.

This wasn’t the first time Robert Brooks heard someone trying to seduce a dancer, but he finally recorded what he called “the last few minutes of what was about 15 solid minutes of grunting and groaning.”

In the post–Jimmy Kimmel world where everything viral is a hoax, it’s easy enough to speculate that the player is just acting out a script for the sake of a cringe-comedy viral YouTube hit. It’s still a prime example of how never to communicate with another human being.