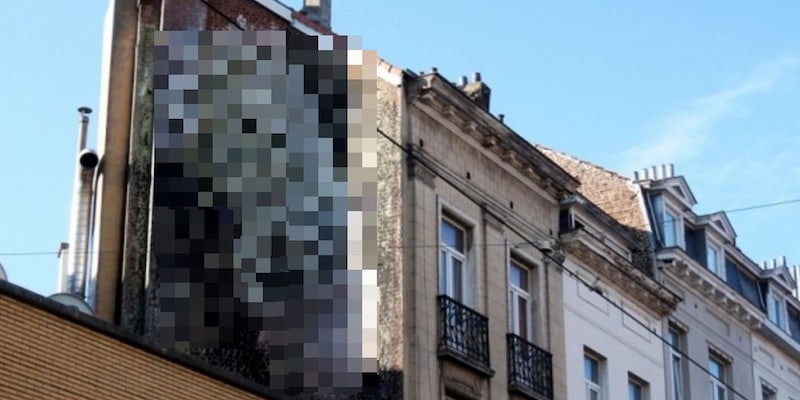 Europe has long been known for its frescoes.

Move over, Banksy: Belgium’s hot new pornographic graffiti artist is even more secretive than you—and he’s taking Europe by storm. Over the past few weeks, the maestro’s work has shocked and delighted many in and around the Brussels region.

It began with the fresco of a giant, wrinkly dick in the town of Saint-Gilles, which showed up in mid-September. Although the local mayor and municipal officials vowed to erase the offending dong portrait, thousands have signed a petition to save it.

Yes, #SauvezLePenis indeed. But this was far from the graffiti artist’s only work. Citizens were also treated to some full penetration apparently painted that same night, in the city center:

There was also a woman, portrayed in a remarkably similar style, lying back and pleasuring herself.

But our mystery artist may have outdone themselves with their latest creation—a puckered butthole below an old advertisement that has been slightly altered to read “ANUS.”

Who’s behind these magnificent murals? People suspect Bonom, a famous local French graffiti artist, but he vehemently denied credit when interviewed by RTBF, saying, “It is not me of course and I do not want to be involved in this story!”

So for now, it appears we’ll all have to keep guessing—not as to the artist’s true identity, of course, but what sex organ or act they’ll bless Brussels with next.