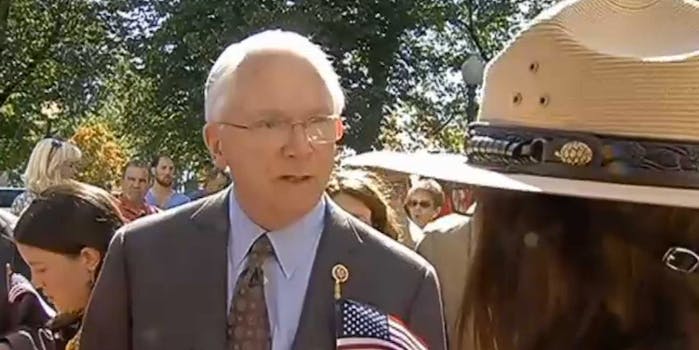 "How do you look at them and … deny them access?" Rep. Randy Neugebauer asked a park ranger.

Like a game of hot potato that costs $300 million a day, Washington politicians are doing everything they can to deflect culpability in the government shutdown and point the finger of blame at someone else.

In a rather baffling piece of video captured by NBC 4 in Washington, Rep. Randy Neugebauer (R-Texas) gets confrontational with an unidentified park ranger at the World War II Memorial on the national mall. The memorial has become the site of a proxy war in the ongoing government shutdown as veterans had to barge past barricades in order to visit the site. The memorial has been closed, along with all other National Park sites, while the president and Congress attempt to reach a deal to fund the government.

“How do you look at them and … deny them access?” Neugebauer asked the ranger.

“Well, it should be difficult,” replied the congressman.

“It is difficult,” the ranger reiterated. “I’m sorry, sir.”

Indeed, it has been a difficult situation for parks employees to negotiate. The shutdown technically makes it illegal for the department to allow visitors on the site, but the department has invoked the First Amendment to allow veterans to visit anyway. All this has gone on while park rangers and 800,000 other federal workers have been furloughed without pay during the budget stalemate.

But the reality of the situation didn’t seem to have any bearing on the congressman’s exchange with the ranger. Neugebauer went on to try and publicly shame the ranger, to no avail.

“The Park Service should be ashamed of themselves,” Neugebauer said.

“I’m not ashamed,” replied the ranger.

“You should be,” said the congressman.

Despite the congressman’s efforts to deflect blame for the government shut down onto a group that is among those suffering the most under it, most Americans squarely put the blame on congressional Republicans, particularly the Tea Party faction in the House, which refuses to pass a continuing resolution to fund the government without a defunding of the Affordable Care Act.

The poll did not mention how many people blame National Park rangers.