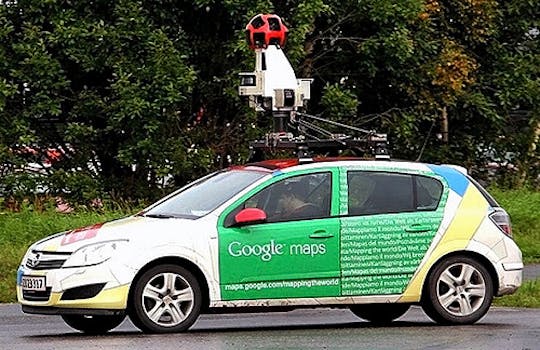 Google sucked up not just photographs of addresses, but also router information—not just where those routers were, but what was on them, including private email and personal passwords.

38 states, the European union and a handful of just folks have sued Google over its Street View product.

Specifically, Google sucked up not just photographs of addresses, but also router information—not just where those routers were, but what was on them, including private email and personal passwords.

Understandably, a lot of people got very upset at Google. And sued them.

Now Google has settled with at least the U.S. states. Part of that settlement was to put their tail between their legs. That is, Google has admitted it breached the privacy of its users.

Additionally, they have been fined $7 million (like fining you a penny), are required to police their employees and their actions regarding privacy and extend outreach to customers to keep them current on privacy measures they can take to stay safe. They are to establish a privacy program within six months, including a one-week employee privacy seminar. (That ought to be a big hit.) They are to reach out with videos and newspaper ads informing users how to encrypt their data on their wireless networks.

In other words, the settlement with the states hasn’t cost Google much, outside of its pride, which doesn’t usually have a tangible effect on a corporation’s bottom line.

Google’s head-first style has resulted in European Union and Canadian hearings and criminal investigations by countries as far flung as Australia and Germany.

Last summer, the Federal Trade Commission fined Google the highest amount it has ever assessed, $22.5 million for bypassing privacy settings in its Safari browser. In 2011, as the New York Times noted, Google agreed to 20 years of auditing by the FTC for funny business surrounding its abortive Buzz network.

This slap on the wrist is unlikely to either change Google’s institutional behavior (given the momentum of enormous organizations) nor change how a given customer feels.The demise of Google Reader and the appearance of Google Glasses are more likely to do that.

But customers are not the only influencers on a huge global corporation like Google. State and pan-national governmental actors like the French government, say, or the European Union, can end a market for a company.

The latest privacy concerns when it comes to Google focus on its Google Glass wearable computer product. Fears include getting bombarded with intrusive advertising, faulty identity attributions (by, say, detecting a person’s ID via their set of Google Glasses), illegal recording of conversations, and, of course, over-aggressive location data mining.